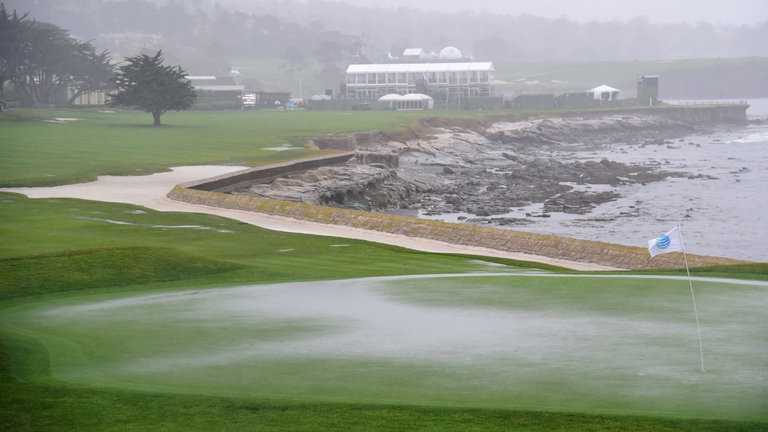 Jordan Spieth made an encouraging start to the AT&T Pebble Beach Pro-Am before play was suspended due to strengthening wind and heavy rain on the opening day.

Spieth was three under for his round with two holes remaining at the Monterey Peninsula course as Rick Lamb, Joel Dahmen and Seung-Yul Noh shared the clubhouse lead on four under par.

Only 36 players of the 156 starters were under the card for their opening rounds as the dreadful conditions affected scores on all three of the courses in play, and officials were forced to call the players in shortly after 1:30pm local time (9:30pm GMT).

The three leaders all defied the elements to record four-under 68s at Spyglass Hill, which is traditionally the toughest layout of the trio, with Noh playing exceptional golf to keep a bogey off his scorecard.

With most of the star names in action at Monterey Peninsula, Spieth was the stand-out as he cruised to the turn in 31 with birdies at the third, fifth and eighth, but he then bunkered his wedge approach to the long 12th and failed to get up and down.

Spieth got the shot back with an excellent two at the par-three 14th only to bogey the next, but he hit back with a well-crafted birdie at the long 16th to get back to three under moments before the horns sounded.

Former Presidents Cup star Nick Watney, who is playing on a medical exemption having missed the bulk of the 2016 season with a back injury, is three under after 13 completed holes at Pebble Beach, while new US Ryder Cup captain Jim Furyk impressed in his first outing of 2017.

The veteran showed that his playing career is far from over as he mixed three birdies with just one mistake in a solid 70 at Spyglass Hill, and he joined the likes of world No 1 Jason Day and Irish duo Shane Lowry and Seamus Power safely in the clubhouse on two under.

Lowry was one over after 10 holes at Pebble Beach before making birdies at four of the next five, but a blocked second into rough from the fairway on the closing hole led to a scrappy bogey-six.

US Open champions Dustin Johnson (16) and Justin Rose (13) are both one under at Monterey Peninsula long with Phil Mickelson, who endured a rollercoaster 17 holes.

The fan favourite started with a bogey before making five birdies in an incredible six-hole run which came to an abrupt halt when it took him three shots to find the green at the short ninth as he ran up a double-bogey five.

He took six at the 12th and then knocked his second shot out of bounds at the next as he carded another double-bogey, but he got back under the card with birdies at the 14th and 16th.