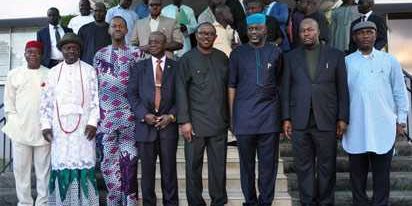 ALL is now set for the meeting of the South South and SouthEast governors meeting in Enugu.

It was learnt that the gathering which is third in the series is expected to be a continuation of the cooperation of the two zones ahead of the 2015 general elections.

As at the time of going to press, there was no indication that the APC governors namely Chief Rochas Okorocha of Imo State, Comrade Adams Oshiomhole of Edo State and Chief Rotimi Amaechi of Rivers State would be in attendance in the meeting.

It was learnt that the meeting today is expected to provide forum for the governors to discuss further on the need for zonal integration and mutual cooperation on economic, social and political areas.