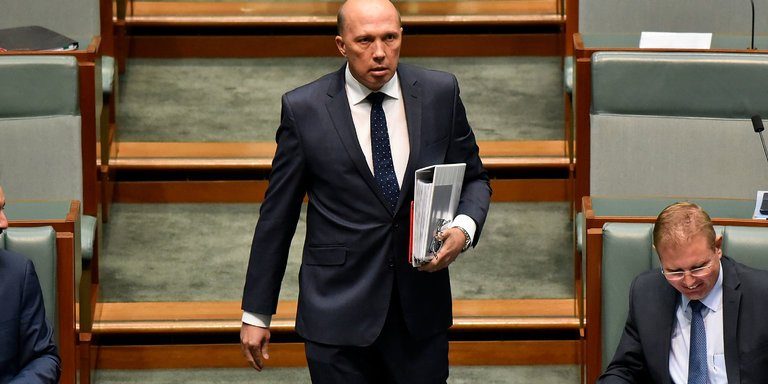 MELBOURNE, Australia — South Africa’s foreign minister said Monday that the Australian government had retracted comments by its home affairs minister suggesting that South Africa was not a “civilized country” because of its treatment of white farmers.

In March, the minister, Peter Dutton, said that “persecuted” South African farmers deserved the protection of a “civilized country” — alluding to Australia — and said he would explore the possibility of fast-tracking refugee visas for them. The South African government has been considering a constitutional amendment to expropriate farmland without compensation to its owners to address racial disparities in the country.

Mr. Dutton’s comments, as well as his suggestion that the farmers faced a “horrific circumstance,” drew fury in Pretoria, where government officials quickly demanded a retraction.

Mr. Turnbull’s office did not immediately respond to a request seeking confirmation of Ms. Sisulu’s account.

The apparent action by the prime minister and Ms. Bishop suggested internal divisions in the government over Australia’s immigration policy, which has come under harsh international scrutiny following reports of refugee mistreatment in the country’s offshore detention program.

Last year, the Australian government paid $53 million in damages to migrants who said they suffered abuse in the camps. Mr. Dutton, who controls immigration policy, has been a staunch defender of offshore detention and has argued that Australia should not accept refugees who would be a burden on the country’s social safety net.

With his comments on South African farmers, Mr. Dutton was wading into a volatile, racially tinged debate. South Africa’s long-governing party, the African National Congress, proposed the land expropriation amendment because most South African farmland remains under white ownership more than 25 years after the end of apartheid.

In an initial response to Mr. Dutton’s comments, Ms. Sisulu said that nongovernmental organizations had been distributing inaccurate statistics about the killings of white farmers and sowing panic.

On Tuesday, Mr. Dutton’s office released a statement countering Ms. Sisulu’s assertions that the Turnbull government had retracted his comments.

“The statement does not accurately reflect the prime minister or minister for foreign affairs’ position on this matter,” the statement said. “There was no rebuttal of the words of Minister Dutton.”

Mr. Dutton’s comments on the farmers drew sharp condemnation from refugee advocates who, citing his perceived indifference to nonwhite asylum seekers who are being held on Manus Island and Nauru, saw him favoring certain refugees because of their race.

“Refugee advocates found Dutton’s comments so alarming because we have a fundamental belief in a nondiscriminatory immigration policy,” said Jana Favero, who works with the Asylum Seeker Resource Center, which is based in Australia.

While Mr. Dutton’s remarks drew widespread criticism, they also struck a chord among some white nationalists for whom the plight of South African farmers had become a rallying point.

In late January, Lauren Southern, a far-right Canadian commentator, published a trailer for her upcoming documentary “Farmlands” on the killings of South African farmers that featured dire warnings of an impending race war. The trailer carried the tagline “CRISIS. OPPRESSION. GENOCIDE?”

The issue has also been covered at length on AltRight.com, a website run by Richard B. Spencer, the American white nationalist.

“I believe the humanitarian programs’ credibility comes from the fact that it is nondiscriminatory and that each application is assessed on its merits,” she said. “That’s been the case under the Turnbull government and as far as I’m aware, there are no plans to change that visa program.”

In the wake of Ms. Sisulu’s remarks about the retraction, the Australian Foreign Ministry released a statement saying the country’s visa system did not favor certain races.

“The prime minister and the ministers for foreign affairs and home affairs have been clear and consistent in reiterating that Australia’s current humanitarian visa program is nondiscriminatory, with each application assessed on its merits,” the statement said. “The program can accommodate those fearing persecution.”

Follow Adam Baidawi on Twitter: @ads_b. Want more Australia coverage and discussion? Join us in our Facebook group, sign up for the weekly Australia Letter and start your day with the Australian Morning Briefing.