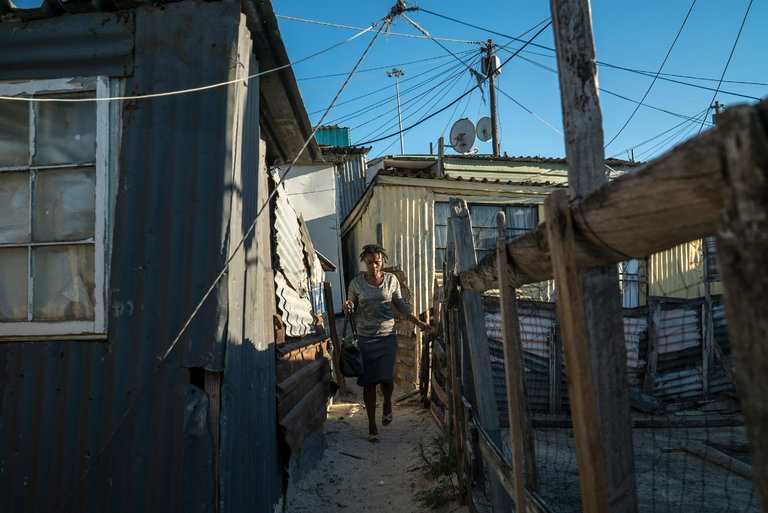 KHAYELITSHA, South Africa — He works in AIDS prevention and his wife gets the occasional gig at a local supermarket. But neither job is regular enough for a “proper home,” Zwai Lugogo says, so his family lives in a shack here in Cape Town’s largest black township, making do with thin walls of painted metal.

Many of his neighbors — housekeepers, factory workers, nurse’s aides — are in the same predicament, working hard at jobs available to black South Africans, but barely scraping by.

“That money that we’re getting from work is just not enough to be able to take care of our families,” said Mr. Lugogo, 34, as neighborhood children, including his 3-year-old son, ran around their narrow street recently. “We need an intervention.”

South Africa is now considering one. Faced with rising discontent over the economy among black voters, the government is weighing something more common in developed economies: a national minimum wage.

KHAYELITSHA, South Africa — He works in AIDS prevention and his wife gets the occasional gig at a local supermarket. But neither job is regular enough for a “proper home,” Zwai Lugogo says, so his family lives in a shack here in Cape Town’s largest black township, making do with thin walls of painted metal.

Many of his neighbors — housekeepers, factory workers, nurse’s aides — are in the same predicament, working hard at jobs available to black South Africans, but barely scraping by.

“That money that we’re getting from work is just not enough to be able to take care of our families,” said Mr. Lugogo, 34, as neighborhood children, including his 3-year-old son, ran around their narrow street recently. “We need an intervention.”

South Africa is now considering one. Faced with rising discontent over the economy among black voters, the government is weighing something more common in developed economies: a national minimum wage.

Late last year, a government panel recommended about $260 a month, or about $1.50 an hour — a small amount even in South Africa, but close to the median income in a country where the official unemployment rate is 27 percent and nearly half the population lives in poverty.

Last week, the nation’s deputy president, Cyril Ramaphosa, endorsed the panel’s recommendation, vowing that the minimum wage would be in effect by May 2018. But in such a sluggish economy, opponents contend that the effort would destroy jobs, especially for the least skilled.

Supporters counter that a minimum wage is the only way to reduce poverty in one of the world’s most unequal societies, helping to dismantle an apartheid-era system designed to provide cheap black labor for an economy dominated by the white minority.

In few places do divisions run as deep as in South Africa. Wealthy communities with living standards equal to those in the West and inhabited disproportionately by whites rub shoulders uneasily with desperately poor townships. A government survey released in January found that black South Africans, who make up 80 percent of the population, earned only one-fifth of what whites did in 2015.

Some smaller African economies, like those of Cameroon, Ghana and Ivory Coast, already have a national minimum wage. But only a small percentage of their workers are in the formal economy and therefore eligible for the minimum, experts say. And even for them, the rules tend not to be enforced.

A national minimum wage would be more meaningful in a big economy like South Africa’s, experts say, because the formal work force is much larger, around 80 percent of all workers. Millions of people would be eligible.

Still, South Africa, sub-Saharan Africa’s most advanced economy, is enduring the same forces as the rest of the continent. It is not growing fast enough to absorb its rapidly growing population, which is leaving rural areas to look for work in places like Khayelitsha, one of the country’s biggest townships with about 400,000 people.

There is added urgency for the government to act: The African National Congress, which helped liberate black South Africans from white-minority rule and has governed the country since 1994, is still stinging from losing most of the nation’s biggest cities in elections last July.

The party could once bank on loyal support from the nation’s black majority. But corruption and economic stagnation for millions of people have steadily eroded that support over the years, resulting in the party’s worst showing in elections since the end of apartheid in 1994.

The frustrations are evident in Khayelitsha. It is roughly situated between two of South Africa’s richest areas: the city of Cape Town and the famed wine country of Stellenbosch. Established in 1983 by the apartheid government, Khayelitsha, which means new home in Xhosa, still provides many of the workers for both communities.

On weekday mornings, soon after daybreak, the men and women of Khayelitsha leave their neighborhoods and walk to the nearest train or bus station. For many, the commute — a legacy of apartheid-era urban planning to separate white and black areas — takes up to a couple of hours each way.

Many on Mr. Lugogo’s street, known as Twecu Crescent, said their commute cost them a quarter or a third of their monthly wages. For black South Africans nationwide, the cost of taxis, buses and other passenger road transportation accounts for 5.4 percent of their expenses, compared with 0.2 percent for whites, who tend to own cars.

A bus called the Golden Arrow stopped not far from Twecu Crescent with a few passengers already on board. It made several stops in Khayelitsha and, after passing a densely packed stretch of shanties, some precariously stacked two high, it pulled out of the township on its way toward Cape Town. Headed to residential areas, the bus transported mostly women who worked in malls or in homes as housekeepers.

Along the way, in a scene repeated in many buses that morning, a woman, in this instance Julia Xakata, began preaching and leading the others in song. Some sang softly while checking their cellphones.

Sitting near the front of the bus next to a window, Makatiso Sekhamane moved her lips while knitting a black cap.

“I knit whenever I have some free time,” Ms. Sekhamane, 47, said, explaining that she usually completed a cap in two days and sold it for about $4. “It’s something.”

Much of the discussion surrounding a national minimum wage — led by government, business, labor and academics — is expected to focus on the amount. According to the panel’s report, a monthly minimum wage of about $260 “would maximize benefits to the poor and minimize any possible” disincentives to work.

The amount proposed by the panel is below the working poverty line of $325 a month, but because the median income of South African workers is only $280 a month, the minimum would help reduce inequality, the panel said.

On Twecu Crescent, many of the employed already earn the proposed minimum, or more. But their wages are far below the salaries earned by the few residents in the nicest homes — $600 a month for a government worker, $900 a month for a young police officer.

The proposed minimum “is not enough,” said Nombeko Mndangaso, who earns about $165 a month working five hours a day as a cleaner in a nursing home. “It won’t make a difference.”

With her husband, who makes $245 a month as a full-time security guard, they earn more than $400 a month. But with rent, transportation, electricity and two daughters, there is little left at the end of the month. A minimum wage of “at least” $340 a month per person, she said, would improve her family’s situation.

Sparsely populated a generation ago, Twecu Crescent now has little or no space between homes. Many homeowners earn extra income by renting out shacks on their property to the endless stream of new arrivals to Khayelitsha.

On Twecu Crescent, a short street divided into two blocks, the handful of sturdily built homes belonging to the upwardly mobile stand out. There is, in a two-story house, the woman who works at a bank; down the street, the man employed by the government power utility; and, on the corner, the police officer whose still unfinished house has a new red Peugeot in the driveway and a low wall with spikes to discourage people from sitting on it.

The street is otherwise lined with more modest homes under corrugated roof sheets, inhabited by those making a third or half of what those in the nicer homes do, and shacks of varying quality occupied by those worse off. Discolored concrete blocks are neatly piled in many front yards, a sign of the slow and unsteady pace of progress for most on Twecu Crescent.

“There was no road here, just gravel,” she said. “There were no houses, just shacks.”

Her father, a welder, and her mother, who sells homemade food from a shack in their front yard, built the house in which she and her brother grew up. After finishing high school in 2012, she sent out her résumé to countless companies for three years before finally securing a part-time job through a friend.

She now works four days a week at a supermarket at a mall in Cape Town, earning $60 a week. About 30 percent of that, or $18, goes to transportation. Ms. Gada, 22, is part of the “born-free” generation of black South Africans who came of age after apartheid’s fall. But like many in her cohort, she was deeply dissatisfied with the pace of change in her family’s circumstances.

“The apartheid, it’s still there,” she said.

The wages she earned from the job that took so long in finding would do little to improve her situation, she said. She did not believe that a monthly minimum of $260 would help. Employers control the balance of power over people like her, she said.

It was early evening, and, all over Khayelitsha, men and women started coming home, most of them walking from bus stops to their streets, their gait slower than in the morning.

On Twecu Crescent, girls sat on a corner playing a game of rocks. A boy pushing an old tire with a stick cast a long shadow up the street.

The woman who was knitting on the bus, Ms. Sekhamane — better known on Twecu Crescent as Mama Kakiso, or the mother of Kakiso, her son — arrived home.

She had had a busy day and, arriving late at the bus stop, had found no available seats on the Golden Arrow. She took a taxi instead, paying an amount equivalent to half the price of one of her black caps.

“I’m going to wash my body and sleep now,” Mama Kakiso said as she slipped into her home. “I can’t do anything.”