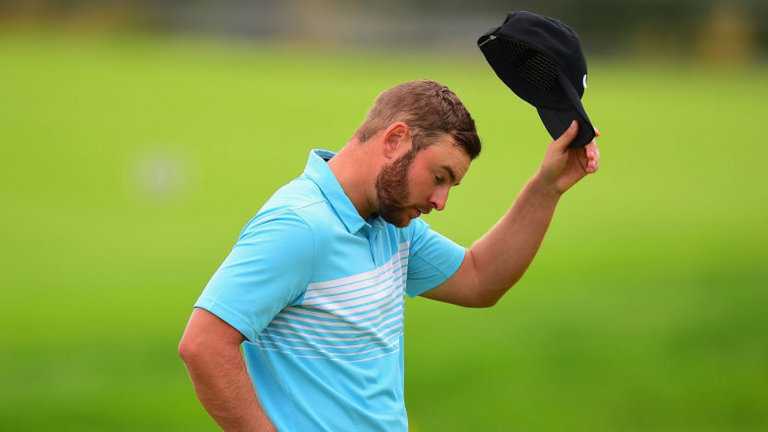 England’s Jordan Smith will take a two-shot lead into the final round of the European Open in Hamburg after shooting a second consecutive 67 on Saturday as he targets a first tour title.

Smith’s bogey-free five-under-par round left him on 12-under overall with Sweden’s Jens Fahrbring and France’s Alexander Levy his nearest challengers, each on 10 under par.

“I’m over the moon, I played lovely from tee to green and putted really nicely,” Smith said. “I’m very excited. It’s been a while since I’ve been in the final group so I’m looking forward to it.”

Levy is still in contention to retain his title after a day on which he was forced to complete his second round before going back out to shoot a third round of 69.

The Frenchman was one of a number of players who had been forced to come back early on Saturday after lengthy rain delays on Friday had brought a premature end to play.

Smith’s fellow Englishman Ashley Chesters had led in the clubhouse overnight but he could only manage a level-par round of 72 on Saturday and is one of six players in a tie for fourth at nine-under.

Further back, US Ryder Cup player Patrick Reed sits at seven-under after an eventful 70 that featured an eagle, four birdies but also four bogeys on the Green Eagle course, 30 kilometres south of the German city.

Home favourite Marcel Siem marked his his 400th European Tour appearance with an ace on the 17th to win one of the tournament sponsor’s models.

The German holed his seven-iron to the 170-yard penultimate hole, the ball flying straight into the cup off the flagstick.

South Africa’s former Masters champion Charl Schwartzel, the highest-ranked player in the field at world No 21, slipped back to five-under after a 73.