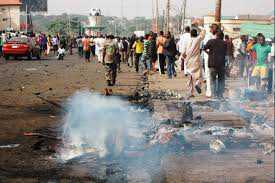 Six persons have been reportedly killed in three separate attacks in southern Kaduna. Two of the victims were said to have been killed during a violence that erupted at Fadan- Chawai in Kauru Local government Area, following the appointment of a new Chief for the Chawai people by the government.

The others were reportedly killed by unidentified gunmen in two villages. Police spokesman Aminu Lawan said he was not aware of the incidents.

Property worth millions of naira were reportedly destroyed by rampaging youths in the chiefdom crisis.

In Rikarwan village of Zangon Kataf Local Government Area of the state, a man and his wife, Ayuba Kure and Sarah were reportedly killed by unidentified gunmen, while another couple, Dauda Maidawa and his wife, Alheri who were said to have gone to their farm located at Fadan- Karshi in Sanga Local government Area of Kaduna State in the early hours of Saturday, were found dead.

National President of Chawai Development Association (CDA) Augustine Audi said at a briefing that the governor’s directive that the Chawai Council of King Makers should nominate and send to him the name of the son of the late Res Tsam for appointment was responsible for the crisis.

Audi said: “As a result of the appointment and announcement of the new Res Tsam by Governor Ramalan Yero, violence erupted in the chiefdom leading to the killing of two people.

“We do not see the need for the urgency in appointing the next Res Tsam when the customs and tradition of the Chawai people do not support the hurry.

“There are traditional rites that were to be performed before the appointment which is why unlike the Hausa or Emirate system, it takes time before a new Res Tsam is appointed.

“Moreover, there has been a distortion and mutilation of the history, culture and laws of the Chawai people by the government which published in its official gazette appointing two hitherto unknown houses as the Chawai Ruling Houses: Kingwai and Kuka instead of the originally known six ruling houses: Zambina, Maizanko, Pari, Kizakoro, Baduru and Kidundun .

“Ascension to the throne, according to Chawai history, native law and customs is not hereditary. We wish to inform the world that so long as the governor took the decision at the pendency of our action in court and so long as the court had ordered him to stay action, pending the hearing of our motion on notice which he is aware, we wish to put it on record that no Res Tsam has yet been appointed until the determination of the case in court”.

Audi urged the youths to exercise restraint and wait for the court.

Yero’s media aide Ahmed Maiyaki denied the report. He said no one was killed as everything has returned to normal.