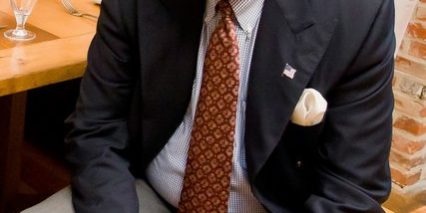 David D. Smith, the chairman of Sinclair Broadcast Group, says the media is getting his company all wrong.

His remark, in a lengthy email exchange with The New York Times, came in response to renewed scrutiny of Sinclair after a video spread rapidly showing anchors at dozens of its stations across the country reciting the same speech about media bias.

Mr. Smith defended the anchors’ segments, known as “must-runs,” and likened them to the late-night shows that networks air on their local affiliates.

“Not that you would print it, but do you understand that every local TV station is required to ‘must run’ from its network their content, and they don’t own me,” he wrote on Tuesday. “That would be all their news programming and other shows such as late-night talk, which is just late-night political so-called comedy.”

In the Sinclair-mandated segments, the anchors warned that some media outlets published fake stories. They also said they were “concerned about the troubling trend of irresponsible, one-sided news stories plaguing our country.”

“Our commitment to factual reporting is the foundation of our credibility,” the anchors added. “Now more than ever.”

The video was assembled by the sports news site Deadspin and posted on Saturday. Soon after it went online, it triggered an outcry on social media and prompted many critics to denounce Sinclair’s practice of requiring its local television stations to air must-runs.

The company, already the country’s largest broadcaster, is set to expand its empire: Sinclair is waiting for regulators to approve its $3.9 billion deal for Tribune Media. The transaction, which was announced in May, would extend Sinclair’s reach into seven in 10 American homes, with more than 200 stations in cities big and small.

Opponents of the deal have cited the dangers of media consolidation, as well as Sinclair’s willingness to use must-runs to advance a mostly right-leaning agenda.

In subsequent emails on Tuesday, Mr. Smith, said that the networks “do exactly the same promotional things that we do” and that such segments were “standard practice in the industry.”

“You cant be serious!” he wrote. “Do you understand that as a practical matter every word that comes out of the mouths of network news people is scripted and approved by someone?”

He also said the promotional segments “were tested by a well-recognized research firm in this industry.”

Other must-runs that Sinclair has required its stations to air include commentary segments featuring Boris Epshteyn, a former spokesman for President Trump, as well as a daily segment from a “Terrorism Alert Desk” with updates on terrorism-related news.

Last year, Sinclair asked its stations to run a segment featuring Scott Livingston, now the company’s senior vice president of news, who read a script similar to the one the anchors recently recited.

[READ MORE: The Times wrote about Sinclair’s programming directives in May.]

On Monday, the criticism directed at Sinclair drew the attention of President Trump, who often praises media outlets that espouse his viewpoints and denounces other news organizations.

“So funny to watch Fake News Networks, among the most dishonest groups of people I have ever dealt with, criticize Sinclair Broadcasting for being biased,” Mr. Trump wrote on Twitter. “Sinclair is far superior to CNN and even more Fake NBC, which is a total joke.”

The Trump administration has enacted or proposed policy changes that would seem to benefit Mr. Smith and his company.

Mr. Smith did not answer a question about his relationship with Mr. Trump and said he did not “engage in Twitter, Facebook or other such activities and have not read anything the president has said.”

Sinclair, which is based in Hunt Valley, Md., has responded forcefully to the criticism prompted by the Deadspin video. On Monday, Mr. Livingston, the Sinclair news executive, said in a statement, “We aren’t sure of the motivation for the criticism, but find it curious that we would be attacked for asking our news people to remind their audiences that unsubstantiated stories exist on social media, which result in an ill-informed public with potentially dangerous consequences.”

Mr. Livingston also sent an email to employees about the video, urging “context and perspective.”

“I know many of you and your stations are now in the media spotlight after the launch of our corporate news journalistic responsibility promotional campaign,” he wrote. He added that the “false stories” that the script referred to were “unsubstantiated ones (i.e. fake/false) like ‘Pope Endorses Trump’ which move quickly across social media and result in an ill-informed public.”

Employees at one Sinclair-owned station, KATU in Portland, Ore., received an email from their general manager warning them not to reply to calls or complaints about the video.

“Please DO NOT answer any questions or get into any discussions with callers, as they try to navigate to someone internally,” the general manager, Robert Truman, wrote. “Most certainly don’t talk to any press about this issue.”

The attention on Sinclair has embarrassed, frustrated and angered current and former employees, some of whom have decided to speak out about the promo and working for Sinclair. One employee, who spoke on the condition of anonymity out of fear for his job, said he was troubled that the promo had overshadowed his station’s journalism.

“Across the entire company, I can tell you there is very little respect for the must-run pieces,” said Aaron Weiss, who worked several years ago as a news director for Sinclair in Sioux City, Iowa. “I’m sure you can find pockets of folks who think they’re great. But in general, no one thought that these were good journalism.” Mr. Weiss also wrote an opinion piece critical of Sinclair for HuffPost that was published on Monday.

Another Sinclair employee, Molly Shen, an anchor at KOMO, a station in Seattle, took another view. In a Facebook post on Monday, she wrote that she “wasn’t forced” to read the script.

“I didn’t do it to save my job or anyone else’s,” Ms. Shen added. “I did it because I do sincerely believe in what we do every day at KOMO as local journalists.”

On Wednesday, a segment from the Sinclair pundit Mr. Epshteyn escalated Sinclair’s response to concerns about the company.

“In terms of my analysis playing during your local news, as you see, my segments are very clearly marked as commentary,” Mr. Epshteyn, wearing a navy jacket and red tie, said. “The same cannot be said for cable and broadcast news hosts, who inject their opinions and bias into news coverage all the time without drawing any lines between them.”