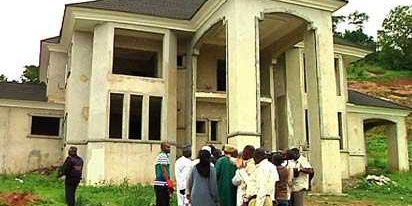 Eight suspected members of Boko Haram were yesterday allegedly killed in Abuja, during a shoot out with a combined team of security forces.

Security sources told Saturday Vanguard that the suspected terrorists were killed in an uncompleted building located at the Kyari close, Zone E Apo Legislative Quarters, near the Gudu Cemetery in the Federal Capital Territory, FCT.

The house allegedly belongs to a retired military officer.

A combined team of security men from the Department of State Services, DSS, and soldiers from the Guards Brigade of the Nigerian

Army, reportedly carried out the operation against the Boko Haram members inside the uncompleted building where the suspects were said to have been allegedly hiding.

However, a national officer of the National Youth Council of Nigeria, NYCN, Prince Adeoso, who spoke to newsmen near the morgue at the Asokoro Hospital said the suspects were extra-judicially executed. Adeoso described the incident as a massacre, pointing out that ”the Apo- seven were able-bodied youths who could not be provided jobs by the government.”

The shoot out which was carried out about 100 metres from the official residence of the Speaker of the House of Representatives, Aminu Tambuwal, lasted several hours. The operation was led by the DSS as the soldiers from the Guards Brigade provided back up support.

Seven corpses of the suspects have already been taken to the Asokoro District Hospital, The corpses were conveyed to the hospital in two ambulances belonging to the Nigerian Police and the Nigerian Security and Civil Defence Corps respectively.

The attack by the security operatives followed intelligence reports which showed that the uncompleted building had over time became a venue for the meetings of the Boko Haram suspects.

Saturday Vanguard learnt that an undisclosed cache of arms and ammunition were recovered by the security agencies after the operation which saw several other suspects sustaining gunshot wounds.

Spokesperson for the DSS, Marilyn Orgar who conducted journalists round the property, said that the team came under gun attack from the building as they approached it, adding that the security men returned fire-for-fire, 12 injured on the side of the suspected Book Haram insurgents.

Orgar did not say whether there was any casualties during the confrontation that ensued between the suspected Boko Haram members and men of the security agencies. She said that 12 suspects were injured even as some others ran into the bush. The DSS paraded two young men whose names were given simply as Kaman Abdullahi and Adamu, as those who provided the the information on the presence of the Boko Haram suspects which they said posed serious threat to peace and security at the Apo District.

But, the operation which commenced at about 2. 30am in the early hours of yesterday, caused fear and uncertainty which enveloped residents of Apo District, especially the nearby Apo Legislative Quarters in the FCT yesterday.

Sources further told Saturday Vanguard that the shooting which was not far from the Legislative Quarters led to pande-monium in the district as some members of the National Assembly in the quarters reportedly fled following false rumours that some Senators and members of the House of Representatives that were the ones actually killed.

Witnesses who however spoke on the issue told Saturday Vanguard that the Zone ‘E’ location of the uncompleted building houses scores of Keke NAPAP operators and some petty traders, who usually retire to the place after their day’s activities after payment of a token fee of N200 to the mai-guard (local security guards) in the building.

Meanwhile, soldiers, DSS operatives as well as policemen from the FCT Police Command, have cordoned off the area, while detailed investigations had commenced over the incident.