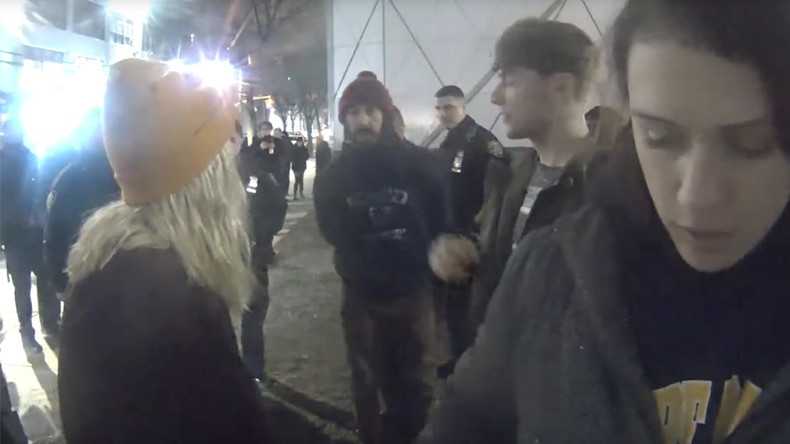 The installation, titled “He Will Not Divide Us,” invites the public to stand in front of a live streaming camera in Queens and repeat the phrase. A video uploaded to the installation’s Twitter account shows LaBeouf, who created the installation, pushing a man after he said, “Hitler did nothing wrong.

Shia LaBeouf has been arrested by NYPD, because of this video #HeWillNotDivideUs#FreeShiapic.twitter.com/Sj8RqP7uGm

The account is crediting the arrest to the incident, while TMZ are crediting it to another incident in which LaBeouf allegedly grabbed a man’s scarf and “scratched him in the process.”

Like/RT if you stand with Shia Labeouf. He’s done so many amazing things this week and he deserves recognition #FreeShiapic.twitter.com/4WqguPxqZH

Video of the arrest shows him being handcuffed by police as participants repeat the phrase into the camera.

Following his arrest, the hashtag #FreeShia was used on Twitter to support his release. LaBeouf was released early on Thursday morning, though it’s unclear at this stage whether the actor has been charged.

Shia has been released #ShiaIsFree#HeWillNotDivideUs

Previous video from the live stream shows a heated LeBoeuf at the site shouting down an alleged white supremacist who attempted to sabotage the installation. Another video shows him licking the face of a counter protester.

White supremacist yells into the camera and Shia LaBeouf shuts him down. This has been a very interesting live stream. #HeWillNotDivideUspic.twitter.com/CqY9pLobWi

This is his third disgusting assault. He’s licking a counter protester’s face here.

Why is Shia Labeouf above the law? #HWNDU#LockHimUppic.twitter.com/6MNgovwDx6