Shekau is dead, security agencies insist • We have no mandate to dialogue with Shekau —Minister 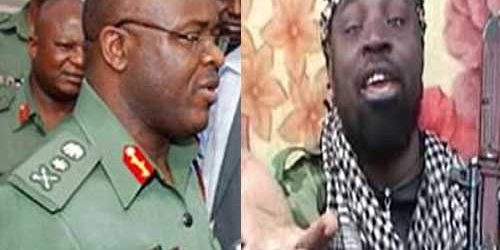 INVESTIGATORS of the Joint Task Force (JTF) who have been probing the video of the leader of the dreaded Islamic militant sect, Boko Haram, Mallam Abubakar Shekau have rubbished a supposed video of the militant leader, which indicated he was still alive.

A report put together by the team of investigators on behalf of the security agencies said that the investigators have been able to fault the video in “a number of ways.”

Though the real location of the militant leader is yet to be ascertained by the security forces, there was a strong belief in the forces that Shekau was not alive.

Analysis of the last video said to have been made available to authorities indicated that Shekau was cloned.

Sources in the know quoted the report as submitting that Shekau in previous video appearances would start with a recitation of a full verse of the Holy Quran that sometimes could last up to five minutes.

The report indicated that the stand-in Shekau in the video never observed that tradition.

Reports also indicated that in previous occasions, Shekau’s speech was never interrupted by hailing from the background and that the last video had such features.

Investigations by the JTF was also said to have identified that the movement on the lips of the man presented as Shekau in the video did not synchronise with the words he pronounced, an indication according to the report of “a recorded message inefficiently manipulated to sustain a non-existent continuum in leadership.”

The report according to the sources also indicated that following the failure of the alleged attempt to mimic Shekau’s voice in the opening part of the video, alleged stand-in Shekau reverted to his real voice.

“The intonation was different as well as the fact that Abubakar Shekau does not drag his voice,” the analysis further stated.

Meanwhile, Minister of Special Duties and inter- governmental affairs, who is also the Chairman of Presidential Committee on Dialogue and Peaceful Resolution of conflicts in the Northern Nigeria, Alhaji Kabiru Tanimu Turaki on Tuesday declared that he has no mandate to dialogue with the perceived leader of the Boko Haram sect, Abubakar Shekau,but rather to identify the key members of the sect and engage them in dialogue.

This is coming just as the minister disclosed that remarkable achievements had been made by his committee in encouraging the repentant members of the group to embrace dialogue towards putting an end to the insurgents while the defiant ones among them would continue to face the military forces as the nation has the full capacity to bring them down to their knees for peace to reign in the troubled region.

The minister who fielded questions from newsmen in Abuja shortly after he briefed the National Working Committee (NWC), of the Peoples Democratic Party (PDP), led by its National Chairman, Alhaji Bamanga Tukur, acknowledged that though President Goodluck Jonathan directed the committee to identify the key members of the terrorist group and engage them in dialogue, the president did not direct that they should locate him (Shekau) and engage him in a dialogue.

When asked about the whereabouts of Shekau, Alhaji Turaki jokingly said “I think I will also ask you where is Shekau. Now with all sense of responsibility, we have been directed by Mr President to identify the key members of the Jamaa Ahl al-sunnah li-da’wa wa al-jihad and then engage them in dialogue. Mr President did not ask us to look for Shekau and engage him in dialogue.”

According to him,” it is important for Nigerians to appreciate that in matters of this nature you don’t just wake up one day even as a dialogue committee established by government, and say you are discussing with the highest leadership of insurgents.

“Usually, what happens is that after that we have been able to establish confidence because it is necessary, they now deploy lower rank of their membership to us, like a water-testing mechanism. They would come to us we will discuss with them, when they go back without any molestation then at the next meeting they would deploy a higher set of members.

“And this is how it has been going to the level where we now are, where we have started to engage key members of these insurgents. But for us it does not have to be Shekau. If these are the people we are now sending as our representatives for the purpose of liaison with the committee we cannot determine for them who should represent them (Boko Haram). For us as far as we know that these are genuine members of the organizations, we deal with them and we have several ways of determining it,” he further explained.

According to Alhaji Turaki, “In the course of this assignment we have seen some people who are fake members of this insurgency groups that have come for the purpose of getting money, but I want to assure that we have been talking to genuine members of the insurgents and these are members that are key as far as peaceful resolution of this matter is concerned,” Turaki added.

The minister who assured Nigerians and the International community that the security challenges would soon be history based on the level of achievements recorded by the committee said, “the Dialogue committee has laid solid foundation for sustainable peace to be achieved in Nigeria. Release of captives on the order of the president has also reduced the level of insurgency in Nigeria. The dialogue committee has achieved an advanced level of negotiation.”

Speaking on how far the committee had gone, the minister added “we have almost concluded our assignment, 99 percent has been concluded. In the next few days, probably before the end of this week we will finish the one percent. Then as soon as we do that we will also inform Mr President that we have finished and he will give us date and time to present the report.”

Responding, Alhaji Tukur commended the minister for the good work he and his team had been doing in the new ministry despite its financial constraints, saying that they were in line with the PDP manifestos and the Transformation agenda of President Jonathan.