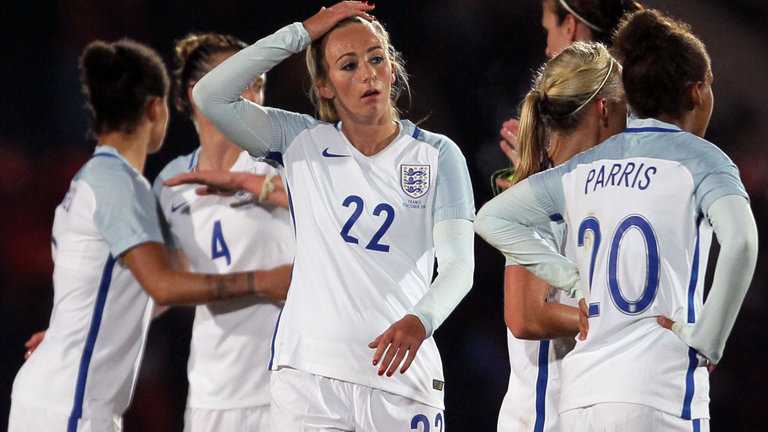 Skipper Steph Houghton is relishing England’s opportunity to tackle the three best teams in the world at the SheBelieves Cup in America.

England return to the States to take part in the four-team competition following the success of last year’s inaugural edition.

They meet France on Wednesday, who are two places above them in third spot in the FIFA rankings, before takinng on world champions USA on Saturday and European and Olympic champions Germany next Tuesday.

“This tournament was special last year [because it was] our first time involved in it and this year it will hopefully be even better,” Houghton told Tuesday’s Sportswomen show on Sky Sports News HQ.

“It is going to be a tough ask but a very exciting one as well.

“You can’t ask for bigger or better games than the likes of Germany, France and USA who are all ranked higher than us in the world rankings at the moment. For us, it is a great test and one which will hopefully put is in good stead for the Euros come July.”

Head coach Mark Sampson guided the Lionesses to an historic victory over Germany in the bronze medal match at the Women’s World Cup in Canada in 2015, while England’s last two matches against France have both ended as goalless draws.

He said: “We were stuffed by France at the Cyprus Cup three years ago – it was 2-0 but it could have been 20 – and then as the games have gone on we’ve found a way to be competitive and we’ve had better and larger spells in the games where we’ve been the better team.

“If you look at the four groups of players here and compare USA to France, and France to Germany, and Germany to England, in terms of talent there’s not a massive gap, so we’ve just got to work out how to deliver what it takes to win.

“So that phrase ‘find a way to win’ is the key of our time over at SheBelieves.

“The bigger picture is we’ve got to get better every training session and every match, but along those lines it helps when you win.”

England round off their preparations for UEFA Women’s Euro 2017 in the Netherlands with a double-header against Italy and Austria in April.

Sampson’s side face Scotland in a ‘Battle of Britain’ in their tournament opener on July 19 and the England coach expects the Lionesses to be a well-oiled machine by the time this summer’s Euros come around.

“We’ve got five games before we play Scotland, and that’s five great opportunities to learn to get better,” he added.

“I’d be pretty scared if I was an opponent of England knowing that by the time we come to Holland, what a place we could be in on the back of these five games.”