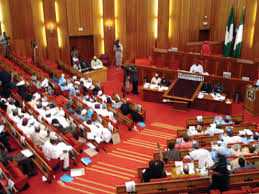 The Senate Committee on the Review of the 1999 Constitution on Wednesday presented its amendment bill detailing the contents of the third alteration to the nation’s foremost document.
Highlights  of the bill are  the  rejection of proposal for state police;  abolition of states/Local Governments Joint Accounts;     adoption of a single six-year tenure for President and governors as well as the splitting of the office  of the Attorney-General of the Federation and Minister of Justice.

A popular demand by Nigerians which the committee did not find too easy to take a position on was the creation of new states.
Although the committee noted that  none of the  61 requests it   received met the entire provisions of section 8(1) of the constitution, it recommended that, “provided the House of Representatives received same, henceforth, the Clerk of the National Assembly should be directed to forward any memoranda that complied with Section 8(1)(a)(i,ii&iii) to the Independent National Electoral Commission to conduct a referendum which itself is still half of the journey towards state creation.”
The Ike Ekweremadu-led committee added: “This can be done anytime, whether or not there is a constitution amendment exercise going on.”
Shedding light on the rejection of state police,  Ekweremadu, who is also the deputy president of the Senate,   said,  “We recommend that the preferred approach at this time is to critically look at the current federal police system with a view to sanitising and strengthening it.”
He explained that the decision on single six-year tenure for the President and governors  was reached “considering the financial expenses often associated with re-election and to ensure that executive heads are free from the distractions to be able to concentrate on public policy issues.”
The committee recommended the removal   of   states-LGs  Joint Accounts from the Constitution, arguing that “it will make for accountability and an effective local government system.”
FCT indigenes are almost having  their desire  met  as the  committee accorded their  territory  a mayoral status.
It said   it was not only  in keeping with the practice in many capital cities of the world, but  to ensure efficient administration of the FCT.
But the committee turned down the proposal  for special status for Lagos      on the grounds that it could be received with a lot of misgivings by Nigerians.
It  also juggled the exclusive and concurrent lists in  the  1999 Constitution, with certain items moved from the exclusive   list to the concurrent list.
According to Ekweremadu, the exclusive list under Part 1 of the Second Schedule to the constitution is congested, cumbersome and unwieldy.
He said, “The committee   substituted  ‘Post and Telegraphs’ with ‘Post and Telecommunications. It also  removed prisons, railways, stamp duties and wages from the Exclusive Legislative List and   added new items to the Exclusive and Concurrent Lists.
The committee also recommended a new procedure for  bringing a new constitution into being by altering Section 9 of the constitution.
“This is predicated on the belief that the incremental approach to constitutional amendment may not be sustainable in the long run. The need may arise in the future for a whole new constitution,”Ekweremadu added.
On presidential assent, the committee recommended   the amendment of Sections 58 and 100 of the constitution to make for the resolution of the impasse where the President fails to sign a bill or return it within 30 days, it becomes automatically enacted.
The committee also recommended first line charge status for State Houses of Assembly, State Independent Electoral Commissions, State Auditors -General  and State Attorneys -General so as to get their funding directly from the State Consolidated Revenue Fund.
On  judicial reforms as they affect amendments to the Third Schedule  of the Constitution, the committee said it recognised the singular role of the judiciary as the final arbiter over all disputes in the nation and thus sought to reinforce its independence, provide for the elaboration of rules, regulations and administrative processes that enhance quick and affordable access to justice.
Ekweremadu stated  that Section 84(5) was amended to provide that “past presiding officers of the National Assembly should be remunerated(provided that such officers were not impeached) just as it is the case with certain past judicial and executive officers.”
He said the proposal to get the President to attach the portfolios of ministerial nominees forwarded for screening by the Senate was also rejected.
According to him, it is the prerogative of the President to carry out such functions for reasons of flexibility.
On rotation of executive offices, Ekweremadu said, “We rejected this proposal on the grounds that the Constitution should not make Nigerian leadership subject to ethnic or regional considerations.”
The committee also rejected the proposal on   voting by those in Diaspora,  saying that “INEC is still grappling to strengthening its capacity to conduct elections within the country.
The  Senate however   deferred the debate on the bill until it returns from its two-week break which commences on Thursday(today).
President of the Senate, David Mark, noted that voting would not be by voice vote, but individual voting.
He said several days would be earmarked for the debate on the bill.