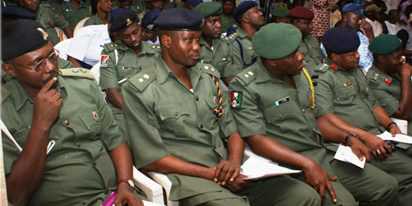 CHAIRMAN, Senate Committee on Petroleum, Downstream, Senator Magnus Abe, has said the Senate refused to probe funds released to the military to fight insurgency, in the country, especially, in the North East, to prevent bringing down the moralE of the soldiers.

The Nigerian Labour Congress, NLC, had called for a probe into how funds released to fight Boko Haram insurgence was spent, especially against the backdrop of continued onslaught of the sect, which had led to hundreds of deaths in recent weeks.

Fielding questions in an interview in Abuja, weekend, Senator Abe, who represents Rivers South East, said:   “The call on the National Assembly by the Nigerian Labour Congress to investigate funds appropriated to the military to fight insurgency is a two-edged sword.

“First of all, the military right now is involved in a sensitive operation to stabilize the country and provide adequate security.
“If we start any form of public probe and the military thinks we are only interested in the money and not the efforts at combating insurgency, that may become counterproductive. The troops would not feel supported.

“However, clearly there are issues dealing with the ways our security funds are being expended. We have more money than Boko Haram, we have more personnel than them, so if we spend our money properly, it should show in the field. People can’t go into Maiduguri and Chibok,  drive for about 200 kilometers without seeing military personnel on ground, that shows that our money is not working for us.

“I think it is rather between the Commander- in-Chief and the military authorities that should go back to the drawing board,  find out what happened to the money that are being released for security operations and how well the money was being spent.

“At this point, I will not advocate for the National Assembly to carry out that investigation but I will insist on a thorough, internal review of the financial dealings as regards the security votes, war on terror and the expenditure of the federal government on security.

“It is a very critical point and nobody should overlook it. Our troop should be well motivated with money, training and necessary equipment to prosecute the war against insurgency.”
Source vanguard