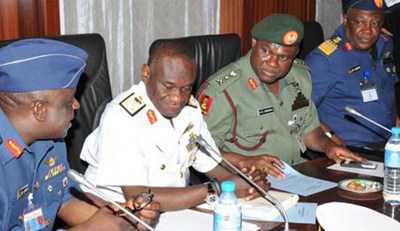 With the rescheduled elections less than two weeks away, the Chief of Army Staff (CAS), Lt-Gen. Kenneth Minimah, said on Tuesday that though several towns and villages had been liberated by the military and regional allies, the structures of governance would have to be reinstated so that citizens could go back to exercise their rights as voters.

However, he declined to give a precise date of when this would be feasible, stating that the decision was entirely in the hands of the Independent National Electoral Commission (INEC).

Minimah made the statement at the end of the National Security Council meeting presided over by President Goodluck Jonathan at the Presidential Villa, where the operations of the Nigerian troops in the North-east and the preparedness of INEC to conduct the elections in that section of the country, were reviewed.

Also, Minimah said that there was no news on the abducted Chibok schoolgirls despite the areas liberated by the troops.

Minimah, who briefed State House correspondents after the meeting, which was attended by the Chairman of INEC, Prof. Attahiru Jega, said: “Council reviewed the North-east operations particularly in the last three weeks and council renewed its confidence in the Nigerian armed forces and commended them too.

“You know Yobe and Adamawa States have been liberated completely and we look forward to the reinstatement of structures of government and governance.

“I am also sure you know that in Borno State, out of the 27 local government areas, we have three local governments remaining – Abadam, Kalabaldi and Gwoza – and we are optimistic that with time we will liberate these areas.”

Asked if there were talks about the elections, Minimah said: “I am not
competent to speak on that matter. INEC is still there, INEC has to reassess the situation and evaluate because the areas have been liberated.

“But I can also tell you that not all structures of governance have been reinstated and they will need to be reinstated so that citizens can go back to their areas and it is then I think they can exercise their rights as voters. How soon? I don’t know.”

On whether the military will conclude their operations before the March 28 presidential election, he said: “It is our wish and we pray God gives that to us, but war is war. Wars sometimes are not fought on some platforms of permutations.”

On the Chibok girls, the army chief said: “No news for now. In all the liberated areas we have, we have also made enquiries but the truth is when the terrorists are running away they also run with their families, and those we have come in contact with have not made any comments suggesting that the Chibok girls were there and taken away.

“But we are optimistic that as we recover more territories, we will get further details on the girls.”

THISDAY, however, gathered that the conduct of the elections was discussed at the security council meeting, as well as an update given by Jega on the distribution of permanent voters’ cards (PVCs) in the country and the preparedness of INEC for the polls.

Jega, who departed the meeting in the company of other INEC officials at about 2 pm after his presentation, declined to speak to journalists when they besieged him on what transpired or if the possibility of another postponement of the polls was mooted at the meeting.

When asked how the meeting went, he replied: “I believe it went well.”
Speculations have been rife over the fate of the INEC chairman who has come under heavy criticism from the ruling Peoples Democratic Party (PDP) and its supporters over the planned use of card readers for accreditation during the polls.

It could, however, not be established if the controversy trailing his stay in office was discussed.

The general election, earlier scheduled to start on February 14, was pushed back by six weeks, over security concerns, after the security chiefs warned that they could not guarantee security during the elections.

Others in attendance were the Attorney General of the Federation and Minister of Justice, Mohammed Adoke; Minister of Police Affairs, Jelili Adesiyan; Minister of Interior, Aba Moro; and the Minister of Foreign Affairs, Aminu Wali. Also present were the heads of the Department of State Security (DSS) and the National Intelligence Agency (NIA).

Coming on the heels on the security council meeting, the Newspaper Proprietors Association of Nigeria (NPAN) yesterday also held an extraordinary meeting in Abuja on the political situation in the country.

At the end of the meeting, NPAN issued a communiqué signed by its President and Chairman/Editor-in-Chief of THISDAY Newspapers, Nduka Obaigbena, insisting that the general election must hold on March 28th and April 11th as scheduled by INEC.

It said: “The general election must hold on March 28th and April 11th as scheduled by the Independent National Electoral Commission (INEC). The election must produce an outcome and Nigerians must rally around whoever emerges the winner.

“This election is for and by the Nigerian people and it must be free, fair and held in such a way that it will deepen the nation’s democracy such that at the end of the electoral process, Nigeria must be the winner.

“We call on the people of Nigeria, especially political leaders across the nation, to eschew every form of violence. The prevalent do-or-die attitude is unnecessary, unhelpful and unhealthy for our system of democracy. We must all say no to violence before, during and after the elections.”