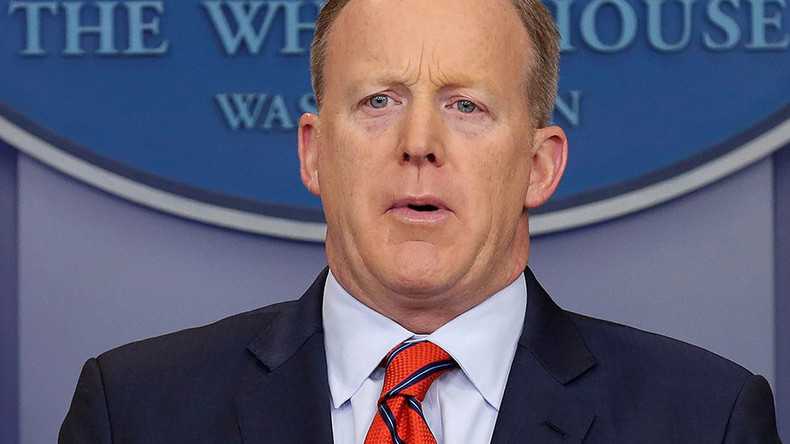 In the midst of Genocide Awareness Month, the White House spokesperson appeared to skip over major facts about the Holocaust.

Asked during a briefing on Tuesday about the relationship between Russia and Syria, Spicer brought Hitler and his apparent ‘lack’ of chemical weapons use into the equation.

Sean Spicer praises Hitler for his restraint, falsely claims he never gassed his own peoplehttps://t.co/TQLGsxbl7mpic.twitter.com/B4gtnsAHb9

“We didn’t use chemical weapons in World War II. You had someone as despicable as Hitler, who didn’t even sink to using chemical weapons. So you have to if you are Russia, ask yourself is this a country and a regime that you want to align yourself with,” he said.

Spicer then sought to clarify the Hitler remark in a rambling, sometimes incoherent, answer to the press: “I think that when you come to sarin gas, he was not using the gas on his own people the same way that Assad is doing.

“He [Hitler] brought them into the Holocaust centers, I understand that. But what I was saying that in the way that Assad used them, where he went into towns, dropped them down into the middle of towns.”

Never thought I would say this, but Sean Spicer should go back to talking about crowd size at the inauguration. https://t.co/D2JZLuypiw

Sean Spicer put more than a foot in his mouth when he said “Not even Hitler gassed his own people.” With around six million exceptions!

“On Passover no less, Sean Spicer has engaged in Holocaust denial, the most offensive form of fake news imaginable, by denying Hitler gassed millions of Jews to death,” Steven Goldstein, Executive director of the center, said in a statement.

.@POTUS@realDonaldTrump MUST FIRE SEAN SPICER NOW FOR ENGAGING IN HOLOCAUST DENIAL. OUR STATEMENT BELOW. #Antisemitism#NeverAgainpic.twitter.com/4dB9ESCaZr

April is Genocide Awareness and Prevention month and given the importance of his role in the White House, Spicer is now being roundly chastised for his lack of basic historical knowledge. Mexico’s former president Vicente Fox Quesada even had a go.

Meanwhile other Twitter users suggested that United Airlines and Pepsi must be thankful for Spicer’s own PR disaster.

The White House later released a follow-up statement from Spicer, with the press secretary offering a further explanation for his remarks.

“In no way was I trying to lessen the horrendous nature of the Holocaust. I was trying to draw a distinction of the tactic of using airplanes to drop chemical weapons on population centers,” Spicer said. “Any attack on innocent people is reprehensible and inexcusable.”