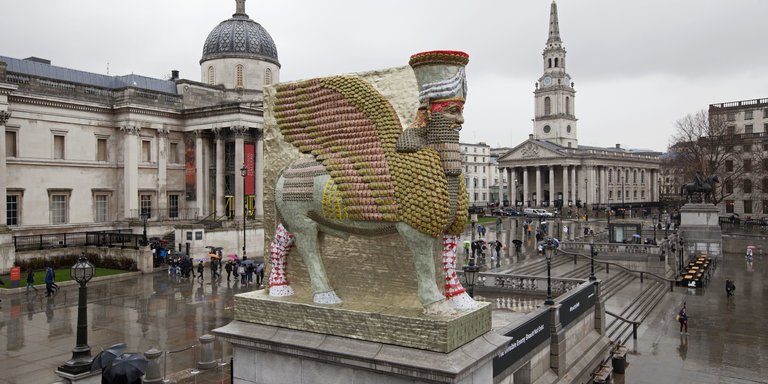 LONDON — A reconstruction of an ancient statue of a winged bull destroyed by ISIS is the latest public art installation to sit on a sculpture platform here known as the Fourth Plinth, on Trafalgar Square.

The sculpture, by the American artist Michael Rakowitz, titled “The Invisible Enemy Should Not Exist,” was unveiled on Tuesday. It depicts a re-creation of Lamassu, an Assyrian statue that stood in Iraq in the ancient city of Nineveh, on the outskirts of modern-day Mosul, until 2015 when the militant group destroyed it along with other irreplaceable works of ancient art.

Lamassu is a mythological creature known for its protective qualities. It has the head of a man and the body of a winged bull. Mr. Rakowitz’s re-creation is made of 10,500 recycled cans of date syrup; dates were a key export in Iraq before war shrank the industry.

In an interview with The New York Times when he was shortlisted for the commission, Mr. Rakowitz described his work as “a placeholder for the thousands of human lives that have gone missing and can’t be reconstructed.”

Mr. Rakowitz, whose Iraqi-Jewish grandparents fled Iraq in 1946, is known for exploring Middle Eastern political themes in conceptual work designed to be displayed outside of galleries. In 2006, he opened an art installation in a store in Brooklyn exploring the politics of selling imported Iraqi dates in the United States.

Mr. Rakowitz’s winning piece was announced last year along with the British artist Heather Phillipson, whose sculpture “The End” will occupy the plinth in 2020. The artists were among five contenders vying for two winning spots atop the prominent outdoor free exhibition space in central London.

The Fourth Plinth is a public art project now run and partially funded by the office of the mayor of London. The first sculpture to be shown there was Mark Wallinger’s “Ecce Homo” in 1999; other commissioned artists have included Antony Gormley, Marc Quinn and Rachel Whiteread.