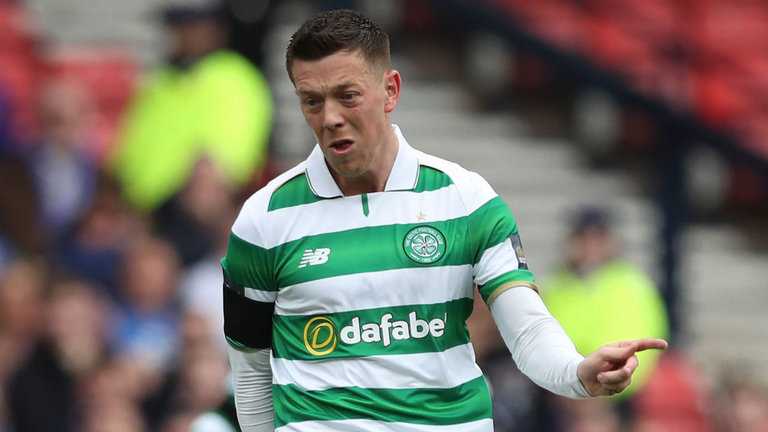 Celtic midfielder Stuart Armstrong, who capped his international debut against Slovenia in March with a man-of-the match performance, is joined by five of his title-winning Celtic team-mates

However, in-form team-mate McGregor will have to wait to earn his first cap after being left out of the Sky Live clash with England at Hampden Park on June 10.

Former Nottingham Forest winger Burke, who made the headlines last summer with his £13m move to RB Leipzig, has also missed out after failing to feature regularly this season for the Bundesliga side.

Burke is set to be drafted into the Scotland U20s squad for the Toulon Tournament after an injury to Kilmarnock’s Greg Kiltie.

“I think it might be too much to ask Oliver to produce the things we think he can produce with a lack of games behind him,” said Strachan.

“We feel the Toulon Tournament will be better for him, to get three games in a short period of time, so he can breathe and enjoy himself without too much pressure. Whereas every time he steps on the pitch here and every time anyone
speaks, there is a lot of pressure on him. I don’t think that’s fair on Oliver.

“Oliver is going to be a top, top player. All he needs now is games and we let Leipzig get on with that to judge when he gets games.”

Aberdeen, who face Celtic in next weekend’s Scottish Cup final, are represented by Mark Reynolds and Kenny McLean, while Jamie Murphy will hoping to make his first appearance after helping Brighton win promotion to the Premier League.