Scores of Insurgents Killed in Battle for Maiduguri 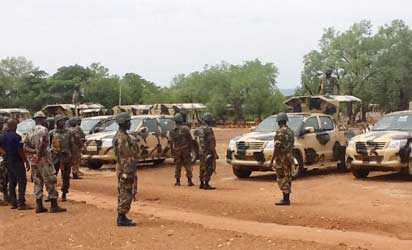 For the second time in two days, the Boko Haram insurgents suffered a crushing defeat on Monday when members of the terrorist group were routed by the Nigerian military, as they attempted to overrun Tungushe, a strategic town in Konduga Local Government Area near Maiduguri, the Borno State capital.

Dozens of the insurgents were killed in the ensuing battle as the Nigerian troops, again repelled the Islamist fighters.

It was gathered that barely seven hours after the terrorist group, which invaded Maiduguri on Sunday morning were pushed back, they regrouped and launched another attack on Tungushe, a strategic town a few kilometers from Maiduguri.
The town has a strong military presence because of its very close proximity to Maiduguri.

According to a security source, the insurgents who lost most of their men during the early morning invasion of Maiduguri somehow regrouped and re-launched a devastating attack on Tungushe by 5 pm, barely 12 hours after the initial attack on Maiduguri. The attack was successfully repelled at about 10 am on Monday.
He said the insurgents met their match with about 1,000 soldiers stationed at the village, who fought them valiantly with the assistance of youth vigilantes.

“Many Boko Haram insurgents were again killed in Tungushe village in Konduga Local Government Area of Borno State, when the terrorists attempted to invade the village with the intention of sacking about 1,000 soldiers stationed in the area,” he said.

He revealed that “the insurgents came at about 5 pm on Sunday and engaged the military in a gun battle, throwing explosives and rocket-propelled grenades (RPGs) but were successfully repelled by the soldiers resulting in the death of hundreds of terrorists”.

“A lot of insurgents’ corpses littered the streets and bushes of the village, as they were seriously dealt with.”

Another military source, who did not want his name in print, confirmed the incident, saying, “Our men seriously dealt with the insurgents as over 100 of them were killed.”

The insurgents had attempted another attack on Maiduguri on Sunday but not only were they roundly repelled, the soldiers had killed many of the Boko Haram assailants.

The terrorist group has made several attempts to capture Maiduguri, which they claim will be used as the headquarters of their proposed Islamic caliphate.