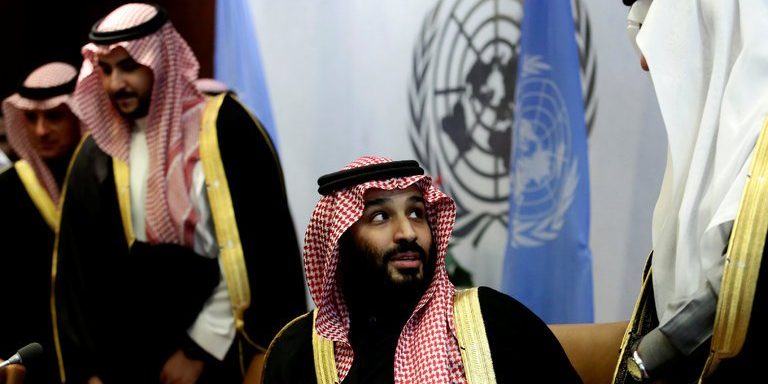 Saudi Arabia’s powerful crown prince has said that Israelis “have the right to have their own land” and that formal relations between Israel and the kingdom could be mutually beneficial.

The comments by Crown Prince Mohammed bin Salman in an interview published on Monday reflected the distinctly warmer tone toward Israel adopted recently by the de facto ruler of a powerful Arab country that once opposed Israel’s right to exist.

Saudi Arabia and Israel still have no formal relations, and Saudi leaders have historically criticized the Jewish state for its treatment of the Palestinians and for limiting access to Muslim holy sites in Jerusalem.

But the kingdom’s stance toward Israel has changed with the rise of Prince Mohammed, who is 32 and is seeking to overhaul Saudi Arabia’s economy and its place in the world. His words on Monday were actually less harsh toward the Palestinians than reports of his previous statements.

Instead of seeing Israel as an enemy, Prince Mohammed has come to view the Jewish state as an attractive regional economic and technological hub as well as a potential partner in the kingdom’s cold war with Iran. And part of that is recognizing Israel’s right to exist, preferably in the context of peace deal with the Palestinians.

“I believe that each people, anywhere, has a right to live in their peaceful nation,” Prince Mohammed told Jeffrey Goldberg of The Atlantic. “I believe the Palestinians and the Israelis have the right to have their own land. But we have to have a peace agreement to assure the stability for everyone and to have normal relations.”

The establishment of formal relations, he said, would benefit both nations, and their neighbors.

“Israel is a big economy compared to their size and it’s a growing economy, and of course there are a lot of interests we share with Israel — and if there is peace, there would be a lot of interest between Israel and the Gulf Cooperation Council countries and countries like Egypt and Jordan,” he said.

Prince Mohammed has a close relationship with the Trump administration, and especially with the president’s son-in-law and adviser, Jared Kushner, whom the president has deputized to try to solve the Israeli-Palestinian conflict.

The details of Mr. Kushner’s peace plan have yet to be released, but it is widely believed that they are being coordinated with Prince Mohammed to try to get buy-in from the wider Arab world.

Small signs of a thaw between Israel and the kingdom have emerged recently. Saudi Arabia allowed a commercial airline flight to Israel to pass through its airspace last month, and many in the region suspect that covert contacts between the two countries have grown, although the kingdom denies this.

Reflecting a divide in the Saudi leadership over how to approach Israel, Prince Mohammed’s father, King Salman, emphasized Palestinian rights in a phone call with Mr. Trump, the Saudi state news service said on Tuesday.

The king restated “the kingdom’s steadfast position towards the Palestinian issue and the legitimate rights of the Palestinian people to an independent state with Jerusalem as its capital,” the king said. He made no mention of Israel.

In the interview, Prince Mohammed also played down the extent of anti-Semitism in Saudi society, which has historically been reinforced by government clerics and textbooks.

“Our country doesn’t have a problem with Jews,” Prince Mohammed said, adding that the Prophet Muhammad married a Jewish woman and that many Jews work in the kingdom.

But like Christians and followers of other non-Islamic faiths, they have not been allowed to build houses of worship or to practice their religion openly.