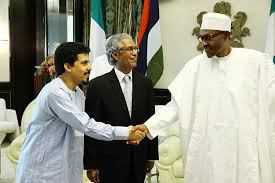 Saudi Arabia has confirmed that Nigeria is among a co­alition of 34 countries that Saudi Arabia will lead in its fight against global Islamic terrorists, chief among them, the Islamic State in Iraq and Syria (ISIS).
The Saudi Ara­bia Ambassador to Ni­geria, Fahad bin Abdul­lah disclosed this at the reception for the leader of the Wahabi Global Congress, Sheikh Abul-Muhsin Abdallah at-Turki.
Sheikh Abul-Muhsin Abdallah at-Turki, who arrived in Nigeria in a private jet via Nnamdi Azikiwe In­ternational Airport, was received by the Nigerian leader of the Jama’atul Iza­latul Bidi’a wa Iqamatus-Sunnah (JIBWIS), Sheikh Abdullahi Bala Lau and his entourage amidst tight security.
Sheikh Abul-Muhsin Abdallah at-Turki, it was gath­ered, is in Nigeria, to at­tend a summit that would deliberate on the found­ing of a centre that would focus on the teaching of genuine Islam as a prelude to finding a lasting peace in the country.
The summit, billed to start on Thursday, is ex­pected to be declared open by President Muhamma­du Buhari. It will be con­ducted in collaboration with JIBWIS.
According to at-Turi, the acts of terrorism be­ing perpetrated by ISIS and other bellicose Islamic groups, who subjugate hu­man rights and freedom of others in countries where they operate is antithetical to the teachings of Islam.
Source
Facebook Comments
Tweet
Pin
Share
0 Shares
By Uchechi Collins15th March 2016
Share this post
Share on FacebookShare on Facebook TweetShare on Twitter Pin itShare on Pinterest Share on WhatsAppShare on WhatsApp