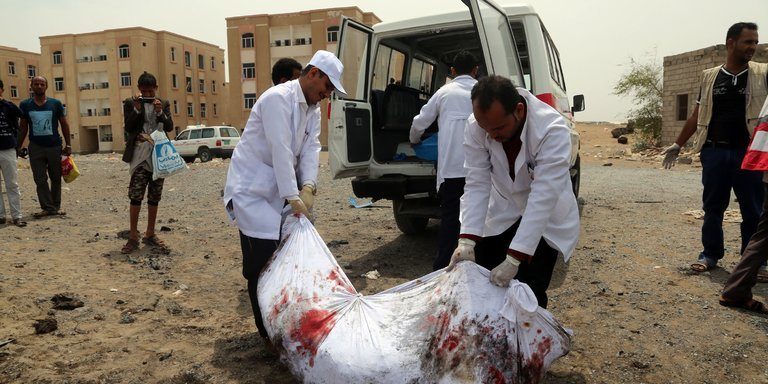 AL MUKALLA, Yemen — The heat was stifling, the power out. So the transients, mostly women and children displaced from nearby towns, ventured outside their temporary housing on Monday for some air, witnesses said. Then the Saudi warplanes struck.

In what medics and residents in Yemen’s western port city of Al Hudaydah described as an instant midmorning slaughter in a residential housing area, the warplanes fired missiles at the civilians, literally cutting them to pieces as they sought relief from the 92-degree temperature. At least 14 were killed and nine wounded.

The Saudi authorities, who contended that the targets had been military, said they were looking into the circumstances behind the airstrike in Al Hudaydah, the only Yemeni port that remains under the control of Yemen’s Houthi rebels after more than three years of war.

But the airstrike was a reminder of the lethal hazards facing unarmed Yemenis from the firepower wielded by the Saudi-led coalition, despite its repeated pledges to spare civilians in its campaign to crush the Houthi-led insurgency.

“The ambulances could not cross into the targeted areas due to intensity of the jets,” Abdulrahman Jarallah, director of the city health bureau in Al Hudaydah, said by telephone. He said there had been no military presence nearby.

Medics in Al Hudaydah said that when they finally reached the missile-strike site, only two bodies could be identified. Most of the dead were in pieces.

“We believe that the targeted people were in the open to cool themselves as there was not electricity in the complex,” Mr. Jarallah said. “So missiles touched bodies directly.”

The missiles hit multistory housing units on the eastern edges of Al Hudaydah, where many people who had fled contested districts south of the city were staying, residents reported.

The Saudi-owned Al Arabiya television news channel said that the warplanes had bombed Houthi military gatherings and arms caches in the targeted area, and that the airstrikes had set off large explosions.

The United Nations, which has described Yemen as the world’s worst man-made humanitarian disaster, has said that the coalition is responsible for a majority of the roughly 10,000 civilians killed since the Saudis began bombing in March 2015.

Human rights groups have increasingly criticized Saudi Arabia over what they call indiscriminate bombings and the severe restrictions the Saudis have imposed on the flow of humanitarian aid to Yemen, where most of the population lacks food. A growing number of lawmakers in the United States, which has been providing military support to the Saudi coalition in Yemen, including refueling, intelligence and targeting guidance, have called for such assistance to be terminated.

Last month, as Saudi Arabia’s powerful crown prince, Mohammed bin Salman, was visiting the United States on a friendship tour, the Senate defeated a bipartisan effort to end the assistance in a 55-to-44 vote, but only after extensive lobbying by top Pentagon officials.

The Houthi insurgents, who are supported by Iran, Saudi Arabia’s regional rival, have given no indication that they are prepared to negotiate an end to the conflict.

Last week, on the third anniversary of the Saudi-led bombing campaign, the Houthis fired seven missiles into Saudi Arabia, the single-biggest barrage they had ever undertaken, in what they called a justified response to Saudi bombardments.

On Monday, the Houthis launched a missile toward the Saudi city of Dhahran, according to the news agency of the United Arab Emirates, a Saudi coalition ally, but the missile landed in Yemen near the Saudi border.

Human rights groups have criticized the Houthis for the missile strikes. On Monday, Human Rights Watch called the strikes a violation of the laws of war.