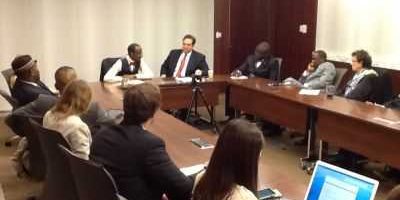 As the debate on the 2014 budget continued in the Senate yesterday, Chairman, Senate Committee on Rules and Business,Senator Eta Enang, on Wednesday accused the Governor of Central Bank of  Nigeria (CBN),  Mallam Sanusi Lamido Sanusi, of committing acts inimical  to fiscal prudence and development of the country.The Senate said that Sanusi had constituted a government to himself by  embarking on the construction of N98 billion international convention  centre in Abuja without appropriation by the National Assembly.According to him, the contract for the centre was approved by Contracts  Tender Board of the CBN without the authority of Bureau of Public  Procurement (BPP).Enang believes that building an international convention  centre, which  includes auditorium, exhibition/multi-functional halls, restaurants,  shops, a five-star and three-star hotels, after  purchasing the  defunct  Nigeria Telecommunications Limit (NITEL) building at the Central  Business Area (CBA) of Abuja, amounted to stretching the CBN mandate too  far.’How much did the CBN use in buying the NITEL building at the central  area? How much and who was paid to control bomb the building in  demolition, which land is now for the CBN five-star hotel and convention  centre? Could this money not be used to fund the national budget?’  Enang queried.Other unauthorised spending by the CBN, according to him, included  funding of hotels in Jos,  Plateau State; Ilorin, Kwara State; among  others, to the tune of N10 billion each, besides the N50 billion, which  he said, was proposed for one hospital in Lagos.He also said all these were yet in addition to the funding of the  construction of helipads at some of the business locations of the CBN. ‘These are done with excess and toxic money which would have been used  to fund the federal budget if the Ministry of Finance had done what is  in the law that the National Assembly passed,’ he added.Further, he asked: ‘Who owns who? Is it the CBN that owns Nigeria or  Nigeria that owns CBN? Is CBN a government within a government or a  government unto itself?’