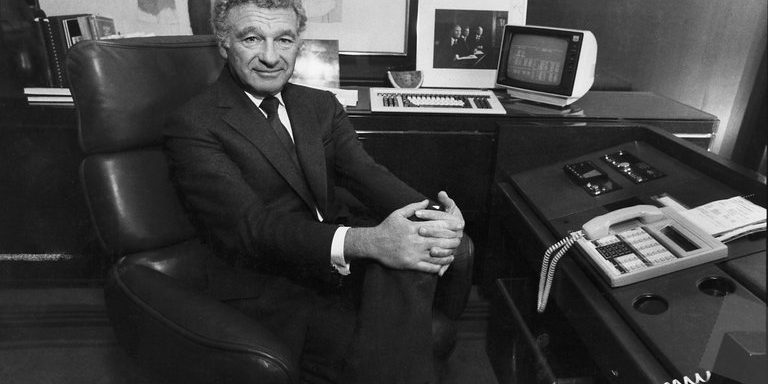 Samuel Belzberg, a feared corporate raider of the 1980s who perfected the contentious practice known as greenmail to build one of Canada’s foremost family dynasties, then reinvented himself as a successful private-equity investor, died on Friday night in a hospital in Vancouver, British Columbia. He was 89.

He had suffered a stroke, his daughter Wendy Belzberg said in confirming the death.

Apart from his business career, Mr. Belzberg, who lived in Vancouver, was widely known for his philanthropy devoted to Jewish causes, among them the Simon Wiesenthal Center in Los Angeles, one of the world’s leading organizations dedicated to Holocaust research and education. He was its founding chairman.

“Sam was both a visionary and proud Jew,” said Rabbi Marvin Hier, who founded the center.

Mr. Belzberg will be remembered primarily as a self-made businessman — a get-out-of-my-way entrepreneur who rose from the Canadian prairie to the pinnacle of the corporate world.

Starting out by selling used cars in Alberta in the 1940s, he went on to join his brothers, Hyman and Robert, in 1963 in founding what became First City Financial, a financial services giant and holding company, originally based in Vancouver, that would be used by the family for its high-profile corporate takeovers.

Mr. Belzberg first attracted attention outside of Canadian business circles in 1979, when he amassed shares of the Bache Group, at the time one of the largest retail brokerage companies in the United States. Bache was vulnerable, having been squeezed by a silver-market gamble, but its managers bitterly fought the Belzbergs’ demands for board seats.

The battle was detailed in 1981 in a front-page article in The Wall Street Journal, which reported that Bache executives believed that Hyman Belzberg “might have ties to organized crime.”

Sam Belzberg angrily dismissed that notion, although he did acknowledge that his brother had vacationed at the Acapulco Hilton in 1970 and, he said, mingled unwittingly with underworld figures from the United States and Canada. (According to intelligence reports that were later made public, the mob bosses were meeting in Mexico to discuss casino strategy.)

In the end, Bache took refuge in the arms of Prudential Insurance, selling itself to Prudential in a deal that made the Belzbergs roughly $83 million in today’s money.

Seizing on the junk bond boom and sometimes teaming up with American raiders like T. Boone Pickens, the Belzberg brothers — with Sam Belzberg running the show — quickly became known as greenmailers. The term refers to investors who accumulate stock in a company, threaten a takeover and then drop the threat after the company agrees to buy back the shares at a premium.

Mr. Belzberg rejected that characterization as unfair. In an interview with The New York Times in 1986, when First City’s assets were worth roughly $18 billion in today’s money, he said he had never set out to sell stock back at a premium.

“We have business plans when we buy into something,” he said, adding that he sold back shares only when companies refused to listen to his strategic advice.

“I don’t understand why managements that pay the greenmail aren’t criticized,” he said.

Mr. Belzberg said he was simply a merchant banker — by his definition, an investor “who takes advantage of situations and opportunities.”

Samuel Belzberg was born in Calgary, Alberta, on June 26, 1928. His father, Abraham Belzberg, had been a fishmonger in Poland when he emigrated to Canada in 1919 and started a furniture business. Samuel’s mother, the former Hinda Fishman, had also emigrated from Poland. They had three sons (Samuel was the middle one) and two daughters, Fanny and Lil, who were the oldest siblings.

Samuel Belzberg was the only son to graduate from college. He studied business at the University of Alberta.

The business that he and his brothers built began as City Savings & Trust Company in 1963 and became First City Financial in 1971.

He married Frances Cooper, a model and aspiring actress living in Los Angeles whose parents had come from the same small town in Poland as his. When he was 21, his father drove him to Los Angeles to meet her. She survives him.

Mr. Belzberg’s rise in the corporate world was interrupted when he surrendered day-to-day control of First City in 1991. The company had taken huge losses on its securities portfolio and been bruised by a failed takeover attempt of Armstrong World Industries, a Pennsylvania floor-covering and ceiling-board company.

The fight, which coincided with the 1989 collapse of the junk-bond market, made it harder for the Belzbergs to find takeover financing and led Pennsylvania to adopt one of the country’s toughest anti-takeover laws.

The raider era had ended.

It was then that Mr. Belzberg, in his early 60s, started a second act as a private-equity investor, ultimately building a new company in Vancouver, Gibralt Capital, into a powerhouse. Successful maneuvers included the buyout and turnaround of Keg Restaurants, a Canadian steakhouse chain; the financing of ID Biomedical, a manufacturer of vaccines based in Quebec City; and huge real estate projects in Nova Scotia, California and Oregon.

“He started over because he had lost a lot of money and had something to prove,” Wendy Belzberg said. “And he had commitments, philanthropic ones, that he was determined to make good on.”

With his wife, Mr. Belzberg founded the Dystonia Medical Research Foundation in 1976 after one of their daughters, Cheri, was found to have dystonia, a movement disorder. Mr. Belzberg was also a founder of Yeshiva University High School of Los Angeles, which offers Modern Orthodox teaching, and he established Action Canada, a nonprofit leadership development initiative.

Besides his wife and his daughter Wendy, he is survived by two other daughters, Lisa Belzberg and Cheri Tannenbaum; a son, Marc; and his sister Lil Faider.

Wendy Belzberg said that her father, an avid golfer and fisherman, loved to mentor his teenage grandchildren, bringing them to Gibralt as interns, imparting his “sometimes dictatorial” advice and, above all, training them how to be savvy with money.