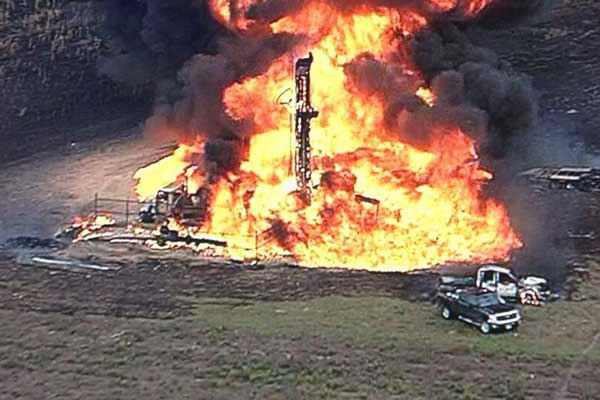 The deadly explosion occurred during a Joint Investigation Visit (JIV) for the official clamping of a spillage site along the route of the Agip pipeline.

It was gathered that the victims of the explosion were burnt beyond recognition and could not be identified.

Though no one could confirm the identity of the victim, Saturday Mirror gathered that the JIV team is made up officials from the Ministry of Environment, the Department of Petroleum Resources, the Nigerian Agip Oil Company (NAOC), the representative of the Azuzuama Community and NOSDRA.

Unconfirmed report also has it that two soldiers attached to the team for security may be among those killed in the explosion.

A former Vice Chairman of the Azuzuama Community Development Committee, Comrade Dennis Dumde, confirmed the recovery of 12 dead bodies from the explosion site between Thursday night and Friday morning.

According to him, though the source of the fire is not known,”the identity of the victim cannot be ascertained. They were burnt beyond recognition.

“ The State Coordinator of Environmental Rights Action (ERA), Comrade Morris Alagoa who also confirmed the unfortunate incident, said a team of Environment Ministry officials has been deployed to the community by the State Commissioner, Inuro Wills.

It was further gathered that the incident which occurred at about 4pm on Thursday, threw the community into wailing.

Another source identified as Steve, said the explosion occurred while a swamp boogie, hired to clear the spillage site hit another part of the pipeline and ignited a fire that caught members of the JIV team unawares, “we heard a loud bang and saw a thick smoke coming from Brown Bush, the location of the rupture pipe.”

“Many of the villagers rushed to the site but the fire ball was huge and so could not rescue anyone. At About 8pm, a rescue team raised by the villagers searched the scene. Four bodies were recovered on Thursday night.”

“Another search on Friday morning, recovered six more burnt bodies. Two persons were rescued. We cannot identify them and be able to know the soldier from the officials. It is sad.”

The spokesman of the State Police Command, Astimin Butswat, confirmed the development and said he is expecting full brief from the Marine Component of the Police Command, “the Command will issue a full statement on the incident soon.”