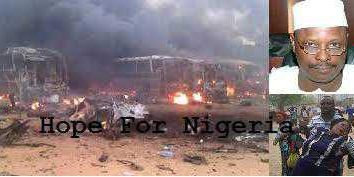 “The Sabon Gari incident was Allah’s way of driving away his enemies and paving way for the Islamic School”. – says Kano State Government Spokesman.

Report is emerging that a few days before the bus station blast, the officials acting on the orders of the Executive Governor of Kano State His Excellency Alhaji

Kwakwanso, sent some security agents to warn the traders and bus owners to vacate the park or face bloody consequences. Little did the owners of the car park know that the same piece of land where the park is located has been earmarked for the construction of an Islamic school.

The Igbo Community that inhabit the Sabon Gari (meaning alien Quarters in Hausa language) area of Kano has repeatedly complained that Governor Kwakwanso of Kano State is yet to visit the area to commiserate with grieving families that lost their loved ones in the Islamic terrorist outrage.

Igbo people in Kano are 100 per cent Christians, mostly made up of petty traders and middle scale merchants. Although some of them would like to relocate, they don’t have any other place to go to because some have complained that they will be unable to locate the route back to their ancestral homeland since they left South East Nigeria over four decades ago. They are in effect a wandering trading community going from one part of Northern Nigeria to another.

In a move calculated to send the clearest message that Igbos are not wanted in Kano, Governor Kwakwanso has refused to visit or send any top government from his administration to see the bereaved Igbo Christian families. He has also refused to release the bodies of the victim deposited in various mortuaries around Kano for proper Christian burial.

The same Governor Kwakwanso within days of the Baga tragedy in Bornu State visited thye affected Muslim communities and donated in excess of 20 million naira.

Construction workers turned up at the bus station to commence work at the proposed site for the Islamic school.