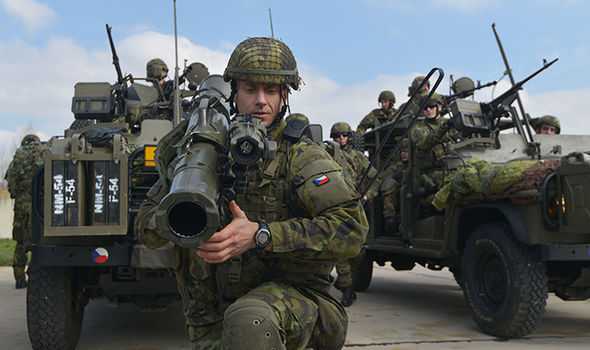 HUNDREDS of British troops are set to be scrambled to countries bordering Russia as a show of strength to Vladimir Putin.

David Cameron will announce the deployment of a 500-strong battalion to Estonia with a further company of 150 troops to be stationed in Poland “on an enduring basis”.

The move comes amid continuing concerns from the Western alliance regarding the intentions of Vladimir Putin following Russia’s annexation of Crimea from Ukraine in 2014.

An official said ahead of the Nato summit in Warsaw: “This will be a summit where you will see Britain assert itself as one of the most crucial elements in the Nato alliance.

“Not only are we going to be steadfast in our support of Nato, but we are prepared to back that up with boots on the ground.”

Speaking ahead of the meeting, Cameron said: “This summit is a chance for us to reiterate our strong support for Ukraine and our other Eastern allies to deter Russian aggression.

“Actions speak louder than words and the UK is proud to be taking the lead role, deploying troops across Eastern Europe. It is yet another example of the UK leading in Nato.”

The deployment of British troops to Estonia and Poland forms part of a wider commitment by the alliance to station four new battalions, totalling around 4,000 personnel, on its eastern flank.

A lightning strike force of 3,000 troops will be placed on standby in the UK and Germany – ready to move with as little as five days notice should Putin attack.

Four RAF Typhoon fighters which had been due to end their service in the Baltic Air Policing Mission will now stay to continue with the vital defence role.

Britain will also take over the leadership of Nato’s Very High Readiness Joint Task Force from next year.

In what will be his final Nato summit, Cameron will undermine Britain’s commitment to spending two per cent of the GDP on defence.

A Government source said: “There can be no backsliding on this issue.

“The PM is very clear that the two per cent commitment is absolutely crucial to Nato going forward.”

Nato Secretary General Jens Stoltenberg said Russia had tripled its defence spending since 2000 as well as having used force against an independent European nation – Ukraine.

He said: “This has really changed our security environment. Nato has to respond.

“When the world is changing, we have to change.”