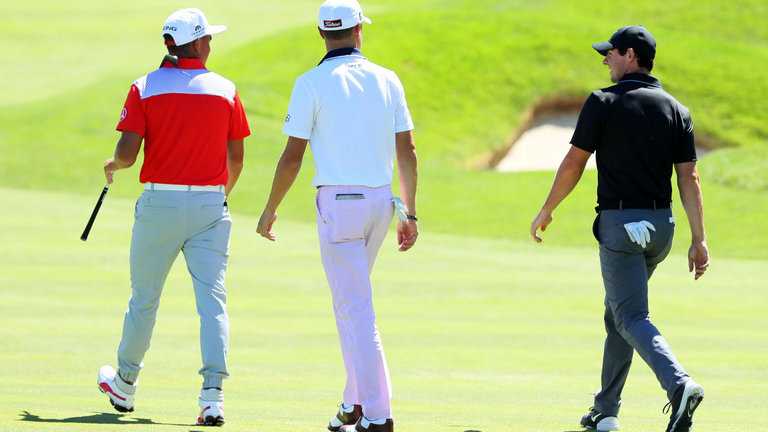 Rory McIlroy and Rickie Fowler both traded light-hearted jabs at Justin Thomas on social media after watching him lose his cool during the final round of the WGC-Mexico Championship.

Thomas took a one-shot lead in to the final round in Mexico City but ended the week three strokes off the pace, as world No 1 Dustin Johnson claimed a second successive victory.

After picking up a birdie on the opening hole on Sunday to extend his lead, Thomas posted three bogeys and a double-bogey along an erratic front nine to reach the turn in 38.

The American then yanked a drive at the par-five 11th and let go of his club in anger, seeing his driver narrowly miss the spectators to the left of the tee box.

Although Thomas apologised straight away, he received criticism on social media and from the commentary team for the incident, leading him to say sorry again on Twitter after his round.

The moment didn’t go unnoticed by Thomas’ fellow golfers, with McIlroy and Fowler wasting no time to give the four-time PGA Tour winner some good-humoured stick.

Thomas was then quick to respond to the pair and was keen to show comparisons between his throw and the club toss McIlroy made at the WGC-Cadillac Championship in 2015.

The witty reply proved popular amongst golf fans on social media, with McIlroy having no response to Thomas’ jibe.

What did you make of the club-throwing incident? Click on the video above to see the incident for yourself!