Rory defends round with Trump 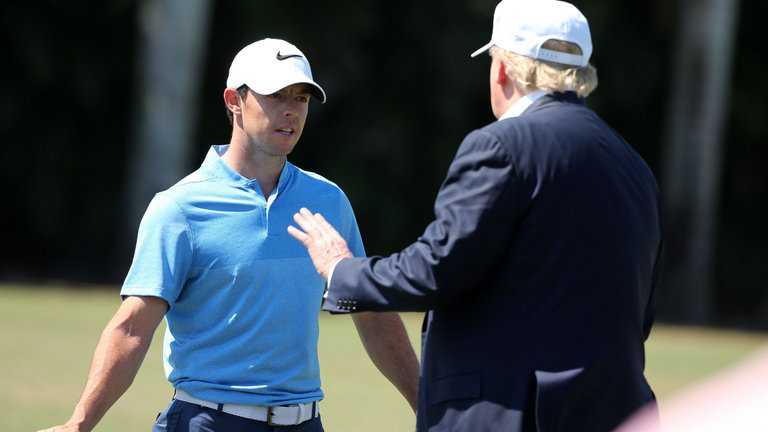 McIlroy drew criticism on social media following his decision to accept Trump’s invitation to play 18 holes at the Trump International Golf Club in Florida, with some labelling the 27-year-old a “fascist” and a “bigot”.

But the world No 3 insisted his motives for playing with the divisive President were not political, and he declared that some of the unsavoury comments directed at him were “just ridiculous”.

McIlroy issued the statement on his Twitter account, which read: “I don’t agree with everything my friends or family say or do, but I still play golf with them.

“Last week, I was invited to play golf with the President of the United States. Whether you respect the person who holds that position or not, you respect the office that he holds. This wasn’t an endorsement nor a political statement of any kind. It was, quite simply, a round of golf.

“Golf was our common ground, nothing else. I’ve travelled all over the world and have been fortunate enough to befriend people from many different countries, beliefs and cultures.

“To be called a fascist and a bigot by some people because I spent time in someone’s company is just ridiculous. I hope, to some degree, this clarifies my decision to accept the invitation that was extended to me.

“Thanks to everyone for your continued support and I look forward to making my comeback in Mexico next week!”

His statement was well received by his fellow professionals, with Ian Poulter tweeting: “Rory, very well said. I played at Trump’s new course in Dubai a couple of weeks ago and received abuse. It’s a game of golf.”

McIlroy was clearly impressed by the performance of Trump, who also played with four-time major champion Ernie Els earlier this month – leading to similar criticism aimed at the South African.

Asked about Trump’s prowess on the golf course, McIlroy said: “He probably shot around 80. He’s a decent player for a guy in his 70s.”

McIlroy has been out of action since sustaining a stress fracture in his ribs during the BMW SA Open in January, but he remains on course to return to competitive golf at next week’s WGC-Mexico Championship – an event which, ironically, was formerly staged at the Trump Doral resort in Miami.

The Northern Irishman insisted he could have played in this week’s Honda Classic, but he is taking no risks over aggravating his injury just six weeks before the Masters.