Romford Journal: In a Pro-‘Brexit’ Corner of Britain, Impatience to Be Done With It 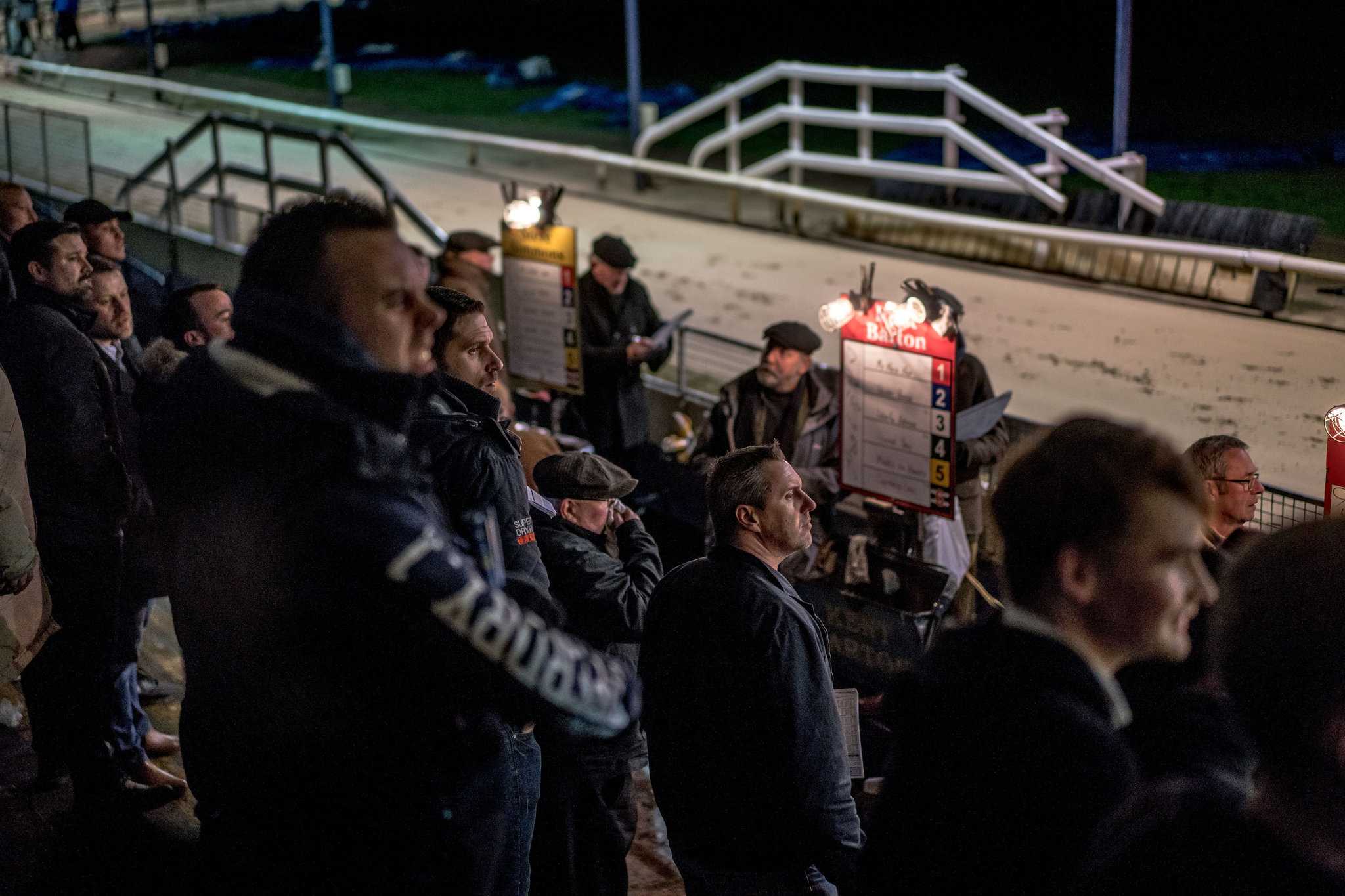 ROMFORD, England — At the greyhound track in Romford the mood is tense. “Think big,” one racecourse employee breathes into my ear, referring not to life in general but to dog No.

6, a muzzled male he reckons has a chance to win.

I watch as fellow bettors nibble on soggy fish and chips and study their betting cards, and as bookmakers write and rewrite the odds on their whiteboards. It is raining.

The scene could not be more English, and that is fitting: Romford is where wealthy London becomes not-so-wealthy Essex, a county that prides itself on its ancient Englishness — not the upper-class variety with clipped private school accents but that of “patriotic, hard-working people who might describe themselves as working class,” says Andrew Rosindell, the local member of Parliament, a Conservative.

Seven months after a referendum vote to leave the European Union, many in Romford also describe themselves as impatient.

ROMFORD, England — At the greyhound track in Romford the mood is tense. “Think big,” one racecourse employee breathes into my ear, referring not to life in general but to dog No. 6, a muzzled male he reckons has a chance to win.

I watch as fellow bettors nibble on soggy fish and chips and study their betting cards, and as bookmakers write and rewrite the odds on their whiteboards. It is raining.

The scene could not be more English, and that is fitting: Romford is where wealthy London becomes not-so-wealthy Essex, a county that prides itself on its ancient Englishness — not the upper-class variety with clipped private school accents but that of “patriotic, hard-working people who might describe themselves as working class,” says Andrew Rosindell, the local member of Parliament, a Conservative.

Seven months after a referendum vote to leave the European Union, many in Romford also describe themselves as impatient.

There is impatience with Supreme Court judges, who last week affirmed a lower-court ruling that the government must seek the approval of Parliament before starting talks for the so-called Brexit. (“Enemies of the people,” one woman commented matter of factly, echoing a recent tabloid headline.)

And there is impatience with Prime Minister Theresa May, who outlined her vision of a clean break with the European Union this month and promised to begin exit negotiations in March, but is distrusted here because she once backed the campaign to remain in the bloc.

With 10 minutes to go until the first race of the night, the conversation at the greyhound track turns to Brexit.

“What is taking them so long?” one man laments.

“There will be an uprising if nothing comes to fruition,” another predicts darkly.

Romford and the Borough of Havering were so eager for Brexit that the local council voted for it five months before everyone else — in a motion last January proposed by Lawrence Webb, the local representative of the anti-European U.K. Independence Party. A well-judged stunt: politically unbinding, widely mocked in the metropolitan press but a sign of things to come.

Earlier, Mr. Webb had picked me up from the train station. We strolled through Romford Market, immortalized in “Market Boy,” a play by David Eldridge. It is usually a bustling affair of 150 stalls and at least as many St. George’s crosses, he said, but in freezing temperatures it is rather more subdued.

Flanked by a modern shopping mall on one side and a 19th-century church on the other, the market has been in operation since 1247, a banner at its entrance claims. Under the Royal Charter granted by King Henry III, no other market is permitted to set up within a radius of six and two-thirds miles (apparently the distance a sheep can walk in a day). So old is Romford that the River Rom was named after the town, rather than the other way around.

But for all that proud tradition, Romford isn’t what it used to be, Mr. Webb says. People work harder than five years ago, but earn less. They worry about rising rents and their children’s education. They are concerned that recent immigrants from the European Union are jumping the line in getting public services.

I tell him that in central London some people are hoping for regrets among those who voted for Brexit, for a realization that leaving Europe would make everyone poorer, that it had all been a terrible mistake.

“Some of the people you meet at dinner parties in London have their head so deep up their backsides they can’t see the light of day,” Mr. Webb says. “I just got off the phone with a family evicted from their temporary accommodation after they lost their council house. Landlords are throwing people out. That’s what is happening.”

The Supreme Court decision last week has only deepened the distrust of “London elites,” he says. And if that ruling has revived hopes of slowing down or softening Brexit in the British capital, a mere 45-minute train ride southwest of here, in Romford people talk about speeding things up.

“The plan is to delay, delay, delay so they never have to go through with Brexit,” Mr. Webb says. Article 50, the legal procedure that, once triggered, sets off a two-year irreversible countdown for the divorce from the European Union, “could have been triggered on Day 1 if they were serious about leaving.”

Could there be an uprising, as some locals have predicted?

“No, the fight will be at the ballot box,” Mr. Webb says. “You watch,” he adds. “If the Conservatives betray the people again, it’s UKIP’s gain. That’s what happened in America.”

If people here have not been tempted too much by UKIP so far, it is in part because Mr. Rosindell, the local member of Parliament, is as nationalist and anti-European as anyone.

His office is in the Margaret Thatcher House, named after Britain’s first female prime minister, who once championed the common European market but toward the end of her career became a Euroskeptic, banging her handbag for effect. Mr. Rosindell recounts proudly how he once took an aging Mrs. Thatcher greyhound racing. (She had her picture taken with a dog that — unbeknown to her, one must assume — was called Tom Euro.)

“Welcome to the heartland of the Thatcherite ideal,” Mr. Rosindell beams when I step inside. “We value tradition, family, nation, the flag, heritage and monarchy.”

That went without saying. There are 44 British flags, or Union Jacks, in the hallway; six portraits of Mrs. Thatcher; three portraits of Queen Elizabeth II; and a bust of Winston Churchill. Buster, Mr. Rosindell’s Staffordshire bull terrier, a popular English breed, wears a Union Jack waistcoat. Even the rug on the floor is the British flag.

“Is that not disrespectful?” I ask as I wipe my muddy boots on it.

No, Mr. Rosindell says, it’s good to have a “sense of humor about these things.”

“We have Union Jack bikinis and Union Jack underpants,” he says cheerfully. It is a sign of “modern” patriotism, he says.

The bunting in his office is red, white and blue. “Why the French national colors?” I joke.

To be fair, he chuckles. Born in 1966, the year England won the World Cup (“A good year to be born, a good year to be English,” he says), Mr. Rosindell believes strongly that Britain should leave the European Union and that “anything that is seen to derail the process will be seen as a betrayal by the elites.”

In the nearby market, some stallholders count Mr. Rosindell as part of that elite. “Air Miles Andy,” they call him. Many say they do not bother voting anymore and went to the polling station for the Brexit referendum only because, for once, they felt their vote could make a difference.

“Choosing between Labour and Conservative is like choosing one disease over another,” says Steve Wickenden, Sticky to his friends, who sells meat next to a painted English flag with the slogan “Come on England.”

A father of three, Mr. Wickenden is not really worried about the dire economic consequences from Brexit he hears about on television. “You can’t make an omelet without breaking some eggs,” he says. “We’ve broken the eggs. Now we need to make the omelet.”

Back at the greyhound track, the anticipation has been building for an hour. Finally the gates open, and a fake orange hare is sent whizzing along a rail on the outside boundary of the racing track at 33 miles an hour, six hounds in hot pursuit.

The noise level briefly rises. It is over in seconds. “A bit like sex,” one bookie comments.

The dog called Think Big came in second to last. No matter. People in Romford have had it with thinking big. Little England might be an insult elsewhere. Not here.

“Globalization, Europe, and where has that got us?” scoffs the bookie. “Nothing wrong with Little England.”