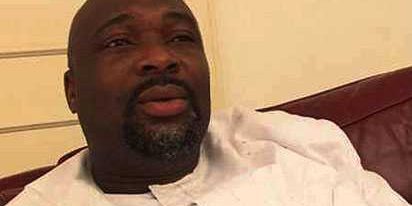 RIVERS State Assembly Leader Chidi Lloyds is going blind, his colleagues have said.
Lloyd, a lawyer, who represents Emohua Constituency, has been moved from the Police Officers’ Mess, Old Government Reservation Area (GRA), Port Harcourt, where he was detained on Friday, to the State Criminal Investigation Department (SCID). He is not allowed to receive visitors and has got no medical help, his colleagues claimed.

Speaking yesterday in Port Harcourt on behalf of the 27 lawmakers loyal to Governor Rotimi Amaechi, the Deputy Speaker of the Assembly, Leyii Kwanee, said Lloyd’s health was deteriorating. He needs medical attention.

Kwanee, a lawyer, who represents Khana Constituency 2 and also the Chairman, Parliamentary Exchange and Mentorship Programme of the Pan African Parliament, revealed that the Speaker, Otelemaba Dan Amachree, was away in Namibia for the conference of Commonwealth Parliamentarians.

The 27 lawmakers said: “We need to ensure that democracy is respected in Rivers State. Hon. Chidi Lloyd reported himself to the Force Headquarters, Abuja on Tuesday. He was flown into Port Harcourt on Friday. We thought he would be charged to court that day.

“As I speak with you now, he is being held up at the State CID by the same police authorities under the leadership of Commissioner of Police, Mbu Joseph Mbu.

“Today (yesterday), the 27 pro-Amaechi lawmakers have met in all the churches. We have been praying, seeking God’s intervention. We all know that Nigerians are prayerful people. We are also not losing sight of the fact that Nigeria is a signatory to a lot of conventions and treaties bordering on human rights.

“We are assembling a team of lawyers, who will look at the possibility of putting together all the human rights abuses that have been inflicted on Hon. Chidi Lloyd, the leader of the 7th Assembly, with a view that if justice cannot be got on the shores of Nigeria, human rights transcend borders.

“We may seek justice to ensure that Hon. Chidi Lloyd’s rights are protected and his cause is also ventilated, probably in the International Court of Justice (ICJ), if it comes to that. The Speaker will also draw the attention of the Commonwealth to the ugly development.”

The pro-Amaechi lawmakers also lauded Senators for concurring with the members of the House of Representatives in taking over the Rivers Assembly, which they described as a welcome development and in the best interest of Nigerians.

They described the commissioner of police as a “major” problem in the deepening political crisis, insisting that the decision of the National Assembly to advise that he be redeployed should be heeded.

The 27 lawmakers noted that with a “neutral” police commissioner, they would be able to sit. To them, the reconciliation committee of the Peoples Democratic Party (PDP), headed by Bayelsa Governor Seriake Dickson, will not serve the interest of Rivers State.

Earlier, in a statement issued yesterday, 25 of the 27 lawmakers said Mbu should be held responsible, should anything happen to Lloyd.

“Since his arrival in Port Harcourt, the Rivers Police Commissioner, Mbu Joseph Mbu, has assaulted and tortured him (Lloyd) like a criminal. They have been moving him from one station to another since he reported to CP Mbu’s office on arrival from Abuja.

“As his lawyer, Bello Olisa Nwofor, stated: ‘the continued blindfolding and detention of Hon. Chidi Lloyd by the police is emphatically dangerous to his health and life.’

“We have also heard from the lawyer who accompanied Lloyd from Force Headquarters to Port Harcourt, Barr. Emenike Ebete, that over 500 riot policemen escorted Chidi Lloyd from the airport to CP’s office and transported in a ‘Black Maria’ as authorities would move criminals.

“As a House, we are indeed saddened to note that the Leader of the Rivers House of Assembly was blindfolded, tear-gassed and handcuffed. As victims of this scripted and staged crisis from Abuja, with a junior minister playing a major role and the police commissioner, Rivers State, as key actor, our worry:

“• Is Mbu aware of Chidi Lloyd’s medical history? This calculated poisoning of Chidi Lloyd reminds us of the assumed circumstances leading to the death of our one-time Senate President Dr. Chuba Okadigbo.

“•Why the blindfold? He is only alleged to have committed an offence. He is not a terrorist nor an armed robber; neither is he a kidnapper. He is a representative of Emohua Constituency of Ikwerre ethnic nationality at the Rivers State House of Assembly and a legal practitioner, who will stand for truth and justice, even when the truth is too much for those bent on destroying our hard-earned democracy, with unnecessary impunity.

“•Why the handcuffs, when he submitted himself to the police?”

The pro-Amaechi lawmakers also stated that they were “genuinely” anxious over the life of Lloyd, whose whereabouts they claimed remained unknown.

Mbu, however, insisted that he remained a professional police officer, not taking sides and not a politician, as alleged in some quarters.