Rivers Re-run: The Battle gets bloodier as Army Major and 3 other soldiers killed in Rivers 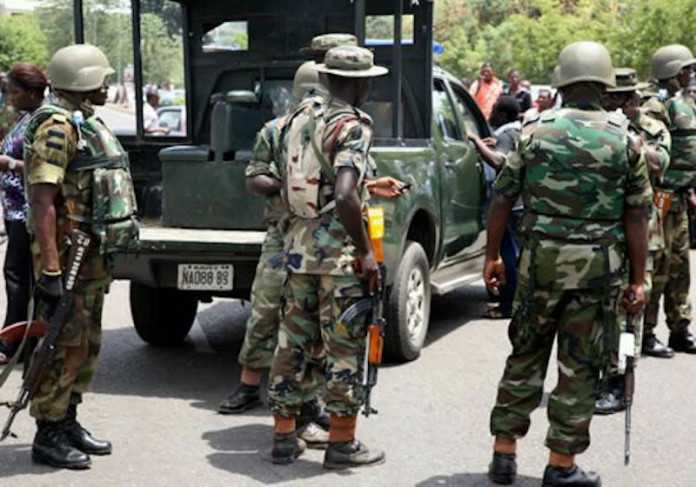 The battle for the control of Rivers State got bloodier on Thursday when a major in the Nigerian Army and a soldier were slayed in cold bold in the Abonnema creek in Akuku-Toru Local Government Area of the state by yet-to-be-identified gunmen.

THISDAY gathered that a troop of soldiers from the 2 Brigade of the Nigerian Army, which was on patrol, was ambushed by people suspected to be pirates. In the exchange of gunfire, the major and soldier were gunned down, while two other soldiers were said to have sustained serious injuries.

The fatal confrontation was blamed on tomorrow’s rerun elections, in which the ruling All Progressives Congress (APC) is slated to take on the Peoples Democratic Party (PDP) for the control of the oil-rich state.

Up for grabs in tomorrow’s polls are the three senatorial seats in Rivers State, 12 out of the 13 federal constituencies, and 22 out of the 32 state constituency seats.

The election petition tribunals and Court of Appeal had nullified the elections of three senators, 12 House of Representatives members, and 22 state assembly members, all of the PDP, who had contested in the 2015 general election.

APC is hell bent on winning most of the seats that are up for grabs in order to make governance unbearable for the Rivers State Governor, Mr. Nyesom Wike, of the PDP and possibly impeach him in the foreseeable future, as it battles to control one of the major oil producing states in the Niger Delta.

The desire by APC to control one of the major oil-rich states was made glaringly evident recently by the National Chairman of the party, Chief John Oyegun, when he did not conceal his displeasure over the Supreme Court rulings, which affirmed the elections of Wike and his Akwa Ibom State counterpart, Mr. Udom Emmanuel.

The door to APC’s attempt to win one of the major oil producing states was also slammed shut when the Supreme Court upheld the election of the Delta State Governor, Senator Ifeanyi Okowa, while the ruling party’s candidate, Mr. Timipre Sylva, lost the Bayelsa State governorship election last January.

Confirming the confrontation between the army and the pirates yesterday, the Assistant Director, Army Public Relations of 2 Brigade, Port Harcourt, Captain Eli Lazarus, described the incident as a “fierce encounter”.

He said: “At about 11 am today, Thursday, March 17, troops on patrol in Abonnema had a fierce encounter with a group of unknown gunmen suspected to be sea pirates.

“Our troops displayed extraordinary valour. Unfortunately, an officer, and a soldier, who sustained various degree of injuries during the encounter, lost their lives. We are in pursuit of the criminals and will surely get them.”

He urged members of the public to go about their lawful activities, assuring them that the army would continue to make the necessary sacrifice to ensure sustainable peace, and the security of lives and property.

Reacting to the incident, APC, in a statement by its state Publicity Secretary, Mr. Chris Finebone, condemned the attack.

The governorship candidate of the APC in the last governorship election, Dr. Dakuku Peterside, also condemned the incident and blamed it on the PDP.

Peterside, who spoke in Port Harcourt, the state capital, alleged that Wike and the PDP were again culpable in this latest tragedy, given their proclivity for provocative statements and threats, both to the citizenry and security officials.

“What has happened today reinforces our earlier position on the conflagration that is capable of resulting from the hate speeches of Wike and members of the PDP.

“How can this needless loss of lives be explained on the eve of an election? Those who are responsible for these unnecessary deaths and violence in Rivers State have indeed taken Rivers State and the entire country for a ride for too long.

“But we must not continue like this. These are rerun elections, not war. We have all watched in the last couple of weeks, the governor’s utterances and instructions and we know that the fruit from his inciting speeches would be harvested in a matter of time. The world can now see the consequences of those statements.

“I think this madness must stop. Even as we prepare for the rerun elections, there is information making the rounds that over 3,000 boys have already been imported into Abonnema for Saturday’s elections from neighbouring Delta and Bayelsa States.

“This is where we find ourselves today but we must all wake up and save Rivers State before it is too late,” he said.

However, the state government blamed the APC for the incident, stating that it was a ploy to pit the people against the military.

The state Commissioner for Information, Dr. Austin Tam-George, in a statement, called for an independent international investigation into the condemnable killing of personnel of the Nigerian Army near Abonnema, blaming APC -sponsored cultists for the gruesome killings as part of their plot to pit innocent Rivers people against the military.

He expressed shock at the ungodly level the APC was willing to go in its bid to incite violence in the state.

He commiserated with the families of the deceased and the military high command over the unfortunate killings.

“The government and people of Rivers State are saddened by the unfortunate killings of the officer and soldier. We call for an independent international investigation to ascertain those behind the killings.

“However, we strongly believe that APC-sponsored cultists may be behind the killing of these soldiers in their ugly plot to pit innocent Rivers communities against the military,” he said.

Tam-George noted that utterances of APC leaders and their relationship with cultists across the state was indicative that they are sponsors of violence across the state.

But as news sank of the latest killings in the state and the blame game between the two major parties, a Rivers State High Court sitting in Port Harcourt yesterday restrained the Chief of Defence Staff, the Brigade Commander of the Amphibious Brigade and the Chief of Army Staff from deploying troops to provide security for the rerun elections.

In a ruling delivered by Justice George Omereji, in a suit filed by the Rivers State PDP Chairman, Felix Obuah, and the PDP, the court gave an interim order restraining the Chiefs of Defence Staff and Army Staff, Brigade Commander, 2nd Amphibious Brigade, “whether by themselves, their agents, servants, officers and operatives or privies, from interfering with the applicants’ right to freely participate in the government of Nigeria either directly or through freely chosen representatives, threaten to arrest, harass, intimidate, torture, or incarcerate the applicants and their members during the rerun elections for the state and National Assemblies on March 19, 2016”.

The court said it based its judgment on the ruling by the Appeal Court in the case between the APC versus others in 2015, detailing the non- involvement of the Nigerian Army and the Armed Forces in elections.

Omereji ordered that the PDP has the responsibility to serve the judgment on the military for it to comply.

“Leave is hereby granted the applicants to issue and serve the originating motion of the jurisdiction of this honourable court for service on the Chief of Defence Staff, Chief of Army Staff and the Brigade Commander of Second Amphibious Brigade and the INEC (Independent National Electoral Commission) at the Federal Capital Territory (FCT),” Omereji said.

Meanwhile, the state governor yesterday raised the alarm over an alleged plot by the police high command to arrest Obuah, 48 hours to tomorrow’s elections.

Wike said the attempt by the police to arrest Obuah was politically motivated and was targeted at giving advantage to the APC during the polls.

The governor also said by declaring the Chairman of Asari-Toru Local Government Area, Sabomabo Jackrich, wanted, a few days to the elections, the police may have been influenced by political considerations.

Speaking in Port Harcourt yesterday during a radio phone-in programme, Wike said the planned arrest of the PDP chairman would be resisted by the people.

He said the police high command brought in officers and men from Abuja to disobey the court order restraining security agencies from arresting PDP leaders before the elections.

“Today, we received information that policemen from Abuja are in the state to arrest the PDP state chairman. If the police want to arrest PDP leaders 48 hours to the election, the action is simply politically motivated,” he said.

He described as unfortunate reports credited to President Muhammadu Buhari on the violence in Rivers State, noting that the president even never contacted him for clarification on the security situation in the state.

The governor said PDP is prepared for the rerun polls, but the APC and the federal government were not prepared, as they were merely interested in antics which would not work.

On the petition written by the Rivers State Government to the embassies of 50 countries, Wike said it was a confirmation of the readiness of the PDP to participate in credible polls. He said already the United States, Britain and Canada, amongst other countries, had requested meetings with him on the issue.

He added that his government had uncovered plans by some politically-motivated individuals to ensure that card readers fail in parts of the state, especially in Obio/Akpor LGA.

Wike expressed confidence that PDP candidates would win the rerun elections because the party started preparing since December last year when the elections were nullified by the Court of Appeal.

He added: “APC cannot win any elections in Rivers State. Do a local government-by-local government assessment and you will understand why the people prefer the PDP.”