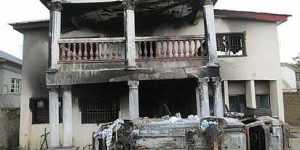 Hell was let lose yesterday in Abeokuta, the Ogun State capital, when residents of Akinremi Estate in Adigbe area of Obafemi-Owode Local Government Area, discovered another ritualists’ den. Angry youths trooped to the area and set the building ablaze.
Yesterday’s discovery was, however, special as the proprietors also used to breed babies for rituals. This development came barely 24 hours after a ritualists’ den was uncovered in Iyana-Egbado in Ewekoro Local Government Area of the state.
Policemen from Adigbe Divisional Headquarters in Abeokuta rescued three pregnant ladies, three kids whose ages range between two and four, from the den. The police also arrested wife of the suspected proprietor of the house.
When Vanguard visited the scene, some neighbours around the estate explained that one of the victims, a young pregnant woman, escaped from the den, ran into a building located about 200 meters away and pleaded with the occupants to save her from assailants, Wednesday evening.
The victim, who claimed to have hailed from Abia State, was said to have informed the occupants of the building where she sought shelter that her elder sister sold her and her unborn baby to the ritualists for N100,000.
It was further gathered that the ritualists told the lady, who had spent three days in the den that she would stay till she delivered her baby, because her aunt had been paid for the unborn baby. The police were alerted and reportedly carried out a raid on the premises at 11pm, Wednesday. As the news filtered into Abeokuta metropolis, angry youths, who were mostly students from the Moshood Abiola Polytechnic, Ojere, Abeokuta, reportedly invaded the duplex and carried out a thorough search of the rooms.
The youths discovered an ivory plate containing fresh blood, coffin, effigies, scorpion, assorted charms and other ritual items.
Also discovered were international e-passport and identity cards of junior and senior secondary school students of Sacred Heart Catholic College, Oke-Ilewo who may have been killed by the ritualists.
Several other male and female cloths of white garment worshipers suspected to have fallen victims were also recovered.
The mob set the building ablaze, including two vehicles parked within the premises: a Toyota Camry salon car with number plate LAGOS: EKY 942 AJ and a Mitsubushi salon car, LAGOS: AGL 971 BH.
Officials of the Ogun State Fire Service, however, succeeded in putting out the fire.
Fierce-looking policemen, who had been helplessly watching the angry youths, however, reinforced with an Armoured Personnel Carrier, arrested some youths and took them away to the command’s headquarters in Eleweran, Abeokuta.
The Command’s Deputy Public Relations Officer, PPRO, Abimbola Oyeyemi, who confirmed the incident, said two victims were rescued, while two others were also arrested in connection with the discovery.
Oyeyemi gave names of victims rescued as Jennifer Goodluck, who is nursing a two-month-old baby, while the other pregnant lady was simply identified as Oluchi. Both were said to be from Abia State.
He said the arrested suspects are one Muibat Yusuf and her brother, who are indigenes of Kwara State.