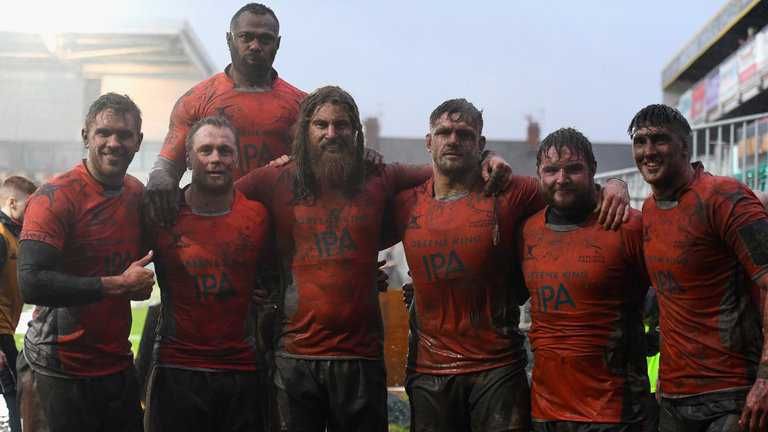 Dean Richards saluted his Newcastle Falcons players and hosts Newport Gwent Dragons for entering “into the spirit of it” after the Rodney Parade pitch was turned into a quagmire.

The Anglo-Welsh Cup match had to be called to an early end after 69 minutes, but Newcastle’s 18-6 lead at that stage will go down as a victory.

One side of the pitch was deemed unplayable, with players up to their ankles when stepping into the growing pools of water and coated in mud.

The win for Newcastle, via tries from No 8 Mark Wilson and wing Belisario Agulla, with scrum-half Sonatane Takulua booting a conversion and two penalties against two Dragons penalties by wing Tom Prydie, has no impact on the tournament.

The Falcons had lost both of their previous matches in Pool Four and even this win does not take them off the basement before next weekend’s final cup clash against Bath.

Director of rugby Richards said: “To be fair to the Dragons ground staff, they did well to get a game on at all. It was literally touch and go before the game and when you start the game, you always have to see it through.

“Conditions were not great but both teams tried. Everyone entered into the spirit of it. I have only probably played in two or three games like that before – and loved every minute of them!

“But, having said that, the boys were outstanding on the day. Their discipline in the first half was incredibly good. There were a few opportunities for us near their line which we will have a look at but, on the whole, the boys did really well.”

Next week’s game against Bath is a dead rubber for Newcastle but the following weekend, back in the Aviva Premiership at Sale Sharks, the Falcons will need to be at their best.

Richards said: “Next week will be an interesting game and, with that it will be a slightly different scenario to the week afterwards.

“The Sale game is big for us in terms of progressing in the league but, if they lose, they are right in the dogfight at the bottom.”

Newport Gwent Dragons had an outside chance of reaching the Anglo-Welsh Cup semi-finals if they had won with a bonus point, but that has gone and now head coach Kingsley Jones will take his side to Gloucester for their final game.

Jones said of the Newcastle game: “I told the players at half-time that I was really disappointed. I thought we controlled the ball well in the conditions and I thought we looked well organised and good.

“We have talked a lot about compounding errors and giving penalties away. Points are at a premium in conditions like this and I felt we gave Newcastle those opportunities and they took them once they were there.

“It’s an arm wrestle and the referee was penalising the defending team today.”