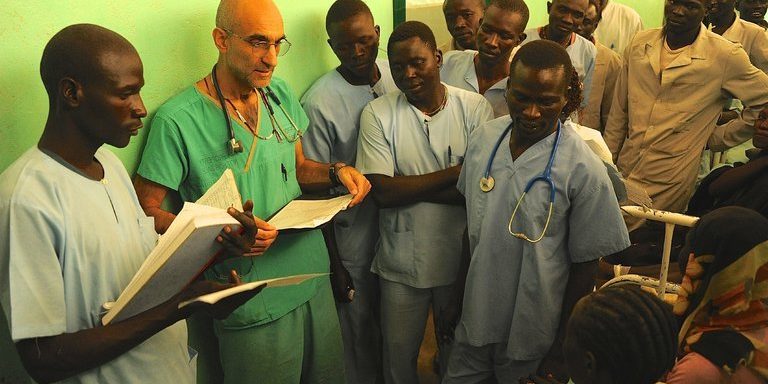 One of the smarter things the director Kenneth A. Carlson does in this documentary is to open with a scene of inexplicable horror: a bombing attack on unarmed civilians in the Nuba Mountains in Sudan. The bomber planes are sent by Sudan’s own president, Omar Hassan al-Bashir. This scene, showing victims both wounded and dead, is followed by a shocking revelation. There’s only a single hospital in this region, and there’s only a single surgeon on the staff.

He is Tom Catena, an American who since 2007 has been tending Mother of Mercy Hospital, which he also helped found. This film is more about Dr. Catena and his work than the appalling political situation that keeps Mr. Bashir in power and restricts United Nations humanitarian aid and outside nongovernmental organizations from assisting the people of the Nuba. It’s tempting to call Dr. Catena a living saint. Numerous surgeries, which he performs with kindness and patience, are depicted in detail. The doctor works impossible hours, serving a population of one million. When he’s not working as a doctor, he is, say, reroofing the facility. In lengthy interviews he speaks of how he found his calling.

Dr. Catena rarely loses his cool, but when he gets angry, it’s at the larger problem, not the patients or the staff members. In one moment of near-despair, he says, “Why do we have to listen to a criminal regime that bombs and kills its own people?”

The film is worth seeing because it’s a moving and remarkable story and it represents a great cause. Mr. Carlson often puts a directorial foot wrong, as when Dr. Catena comes down with malaria and the director tries to construct a fever dream sequence from previously seen footage. Bad idea.

The Heart of Nuba