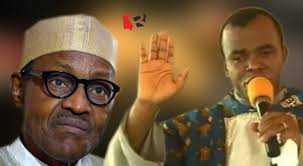 With his main client dead and false prophesy on Buhari exposed, the idol worshipping cleric has insulted our fallen heroes, whose sacrifice is the reason why Biafra is guaranteed to come.**Usman Mbaka bitter Buhari died without visiting Enugu, lashes out at IPOB leadership**
This child of Hausa Fulani in a cassock must be given the full IPOB treatment. Since God has abandoned this foolish idol worshipper of graven images, that never said anything when his Fulani friends were slaughtering fellow priests across Enugu, we shall hasten his fall from grace.
Mbaka must be taught the lesson of his life because for starters we at IPOB do not worship idol like him, that is why we defeated his master Buhari, both inside court and outside. He is upset that IPOB stopped his Daddy Fulani from coming to Enugu to see him. I feel sorry for him.

Musing on the video clip that shows Rev. Fr. Ejike Mbaka of the Adoration Ministry Enugu comment on the Biafra agitation, the fiery Catholic priest is seen saying that the journey for Biafra agitation should be spear-headed by the Igbo elite and not by the youths as currently done.

In an adoration prayer which was held some months back, Fr. Mbaka, in the video and speaking Igbo language during the sermon, said he will join the course for Biafra agitation if the Igbo elites come out. Below is the transcript of the sermon. (Watch video below.) “Please, nobody should tell you again that the Igbos are forsaken. We are believing in nonsense.

If poor children should begin agitating for Biafra, there is nothing bad in Biafra agitation. But we are still saying it strongly, those who said it is Biafra that we want now, let them come out let us see the cream of the Igbos. All of us will go about it. All these poor children agitating in the streets will go behind us.” “For a father prays that his son become greater than him. What will happen to the child should happen to me. That is the prayer of the father. We are not saying there shouldn’t be agitation for Biafra. But let out political cream, those with whom the land stands with: If you come to Anambra, people like Ekwueme, Peter obi, Emeka ofor, and all the Ubas that fill Anambra, all of them will come out, you come to Enugu, all the likes of Ekweremadu, ken nnamani, what Enugu state stands gallant with, Sullivan, all of us will come out.” “ Both the political and the spiritual, all the likes of Pius Anyim, its all of us that will go the journey of demanding for Biafra.

Not our children who are trading, they are shooting to death our children. Where are those people?” “They all have hidden in Abuja and abroad. Am not saying let the Igbos be killed. Am not saying Biafra agitation should not be done. But those who will be at the fore-front; If there are people from Amogu who are here, they will tell you that I came there on Wednesday at night. They were shooting guns and bullets were raining everywhere.” “There were some children I sent on an errand but i was the first to seat there and they knew it was me who came.

What would happen to those children, let it happen to Mbaka. Jesus said, instead of these people to die, let Him die on their stead. That is a leader! Not when one will go and stay and use poor children for sacrifice.” “ When they are saying what they don’t know, children who don’t have any kobo and “Toro,” children who don’t have money to invest in their businesses, they brought them to the main road. Those who are supposed to go the journey of Biafra actualization are not those children on the main road. When you come to Imo, the likes of Iwuanyanwu should come out.” “The likes of Pius Anyim and all the likes in Ebonyi will come out. When you come to Owerri, all the big ones they have will come out; those in Abia will come out. Both lay people and Rev. Fathers.

When all of us have come out, the crème de la crème of the Igbos, then we will begin the journey for Biafra agitation. We will hold a meeting and know what we want. Once they come out, I (Mbaka) will join them o. I will join them. Instead, I will even pay for the flight ticket and we will charter a plane and go. So that they should stop killing our children!” “ Did they say the children and the police should fight? Anyone they shoot to death, we begin to endure. There is no one of them saying that that loves the Igbos more than I do. If you want to be a leader, just come out fully and become it.”

“I said, when Obasanjo froze the container of cement belonging to Ibeto on the high sea and it was trying to expire, I entered flight from here and went to meet Obasanjo face-to-face. I went and met him in Aso Rock and told him that I am finished. That the children of the Igbo tribe said I should ask you, what has the Igbos done to you?” “And you say let the children be roaming the streets on the pretext that they are agitating for Biafra? When the street dog is killed, then you know the owner. I don’t believe in cowardice. If the time is ripe for when we will have the said Biafra, then those for whom the land muscles with, come, say a venue and let all these poor children get behind and let the millionaires come out!” “There is no how the police will see Iwuanyanwu and Ekweremadu, see Sullivan Chime and then shoot at them.

They can’t see Artur Eze, Gburubguru (Gov. Ugwuanyi), see…what is the name of the one that governs Anambra, Obiano, when they see the crème of the Igbos going in the streets, who will shoot in the air, how?” “ Let them not use the poor children for sacrifice. I don’t want to understand what people are saying. How Mbaka decided to keep mum, so I should agree that the children be shot to death? Look at that time they passed from Enugu, nobody told me where they were going, nobody told me what they wanted.”