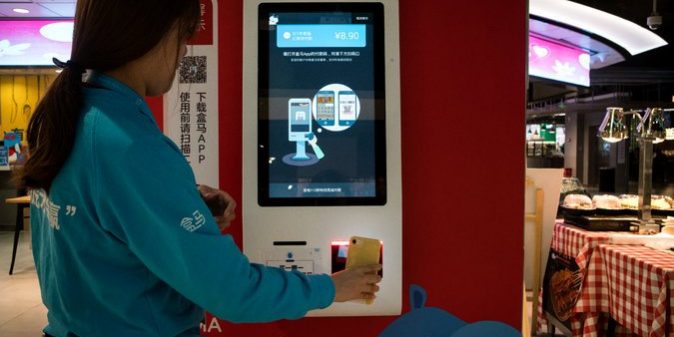 SEATTLE — To see what it’s like inside stores where sensors and artificial intelligence have replaced cashiers, shoppers have to trek to Amazon Go, the internet retailer’s experimental convenience shop in downtown Seattle.

Soon, though, more technology-driven businesses like Amazon Go may be coming to them.

A global race to automate stores is underway among several of the world’s top retailers and small tech start-ups, which are motivated to shave labor costs and minimize shoppers’ frustrations, like waiting for cashiers. They are also trying to prevent Amazon from dominating the physical retail world as it does online shopping.

Companies are testing robots that help keep shelves stocked, as well as apps that let shoppers ring up items with a smartphone. High-tech systems like the one used by Amazon Go completely automate the checkout process. China, which has its own ambitious e-commerce companies, is emerging as an especially fertile place for these retail experiments.

If they succeed, these new technologies could add further uncertainty to the retail work force, which is already in flux because of the growth of online shopping. An analysis last year by the World Economic Forum said 30 to 50 percent of the world’s retail jobs could be at risk once technologies like automated checkout were fully embraced.

In addition, the efforts have raised concerns among privacy researchers because of the mounds of data that retailers will be able to gather about shopper behavior as they digitize their locations. Inside Amazon Go, for instance, the cameras never lose sight of a customer once he or she enters the shop.

Retailers had adopted technologies in their stores long before Amazon Go arrived on the scene. Self-checkout kiosks have been common in supermarkets and other stores for years. Kroger, the grocery chain, uses sensors and predictive analytics tools to better anticipate when more cashiers will be needed.

But the opening of Amazon Go in January was alarming for many retailers, who saw a sudden willingness by Amazon to wield its technology power in new ways. Hundreds of cameras near the ceiling and sensors in the shelves help automatically tally the cookies, chips and soda that shoppers remove and put into their bags. Shoppers’ accounts are charged as they walk out the doors.

Amazon is now looking to expand Go to new areas. An Amazon spokeswoman declined to comment on its expansion plans, but the company has a job posting for a senior real estate manager who will be responsible for “site selection and acquisition” and field tours of “potential locations” for new Go stores.

“Unanimously, there was an element of embarrassment because here is an online retailer showing us how to do brick and mortar, and frankly doing it amazingly well,” said Martin Hitch, the chief business officer of Bossa Nova Robotics, a company that makes inventory management robots that Walmart and others are testing.

Nowhere are retailers experimenting more avidly with automating store shopping than in China, a country obsessed by new tech fads.

One effort is a chain of more than 100 unmanned convenience shops from a start-up called Bingo Box, one of which sits in a business park in Shanghai. Shoppers scan a code on their phones to enter and, once inside, scan the items they want to buy. The store unlocks the exit door after they’ve paid through their phones.

Alibaba, one of China’s largest internet companies, has opened 35 of its Hema automated grocery stores, which blend online ordering with automated checkout. Customers scan their groceries at checkout kiosks, using facial recognition to pay electronically, while bags of groceries ordered by customers online float overhead on aerial conveyors, headed to a loading dock for delivery to shoppers.

Not to be outdone, JD, another big internet retailer in China, said in December that it had teamed up with a developer to build hundreds of its own unmanned convenience shops. The businesses put readable chips on items to automate the checkout process.

At its huge campus south of Beijing, JD is testing a new store that relies on computer vision and sensors on the shelves to know when items have been taken. The system tracks shopping without tagging products with chips. Payment, which for now still happens at a kiosk, is done with facial recognition.

JD and Alibaba both plan to sell their systems to other retailers and are working on additional checkout technologies.

Back in the United States, Walmart, the world’s largest retailer, is testing out the Bossa Nova robots in dozens of its locations to reduce some tedious tasks that can eat up a worker’s time. The robots, which look like giant wheeled luggage bags, roll up and down the aisles looking for shelves where cereal boxes are out of stock and items like toys are mislabeled. The machines then report back to workers, who restock the shelves and apply new labels.

At 120 of Walmart’s 4,700 American stores, shoppers can also scan items, including fruits and vegetables, using the camera on their smartphones and pay for them using the devices. When customers walk out, an employee checks their receipts and does a “spot check” of the items they bought.

Kroger, one of the country’s largest grocery chains, has also been testing a mobile scanning service in its supermarkets, recently announcing that it would expand it to 400 of its more 2,700 stores.

New start-ups are seeking to give retailers the technology to compete with Amazon’s system. One of them, AiFi, is working on cashierless checkout technology that it says will be flexible and affordable enough that mom-and-pop retailers and bigger outlets can use it. In the United States, venture capitalists put $100 million into retail automation start-ups in each of the past two years, up from about $64 million in 2015, according Pitchbook, a financial data firm.

While such technologies could improve the shopping experience, there may also be consequences that people find less desirable. Retailers like Amazon could compile reams of data about where customers spend time inside their doors, comparable to what internet companies already know about their online habits.

“It’s combined with everything else Amazon might know about you,” said Gennie Gebhart, a researcher at the Electronic Frontier Foundation, an online civil liberties organization. “Amazon knows what I buy online, what I watch and now how I move around a space.”

In China, there is less public concern about data privacy issues. Many Chinese citizens have become accustomed to high levels of surveillance, including widespread security cameras and government monitoring of online communications.

Depending on how heavily retailers automate in the years to come, job losses could be severe in a sector that has already experienced wave after wave of store closings by the likes of Macy’s, Toys “R” Us and Sears.

Retailers are playing down the threat to jobs. Walmart, the largest private employer in the United States, says that it does not anticipate automation will lead to job losses, but rather that the new technologies are meant to redirect employees to spend more time helping customers find what they need.

“We see this as helping our associates,” said John Crecelius, vice president of central operations at Walmart. “We are a people-led business that is technology enabled.”

Some traditional retailers are also skeptical about whether the sort of automation in Amazon Go can move to large stores. They say the technology may not work or be cost effective outside a store with a small footprint and inventory.

But he said it was just a matter of time before more cameras and sensors were commonplace in stores. “It’s a few years out,” he said, “before that technology becomes mainstream.”