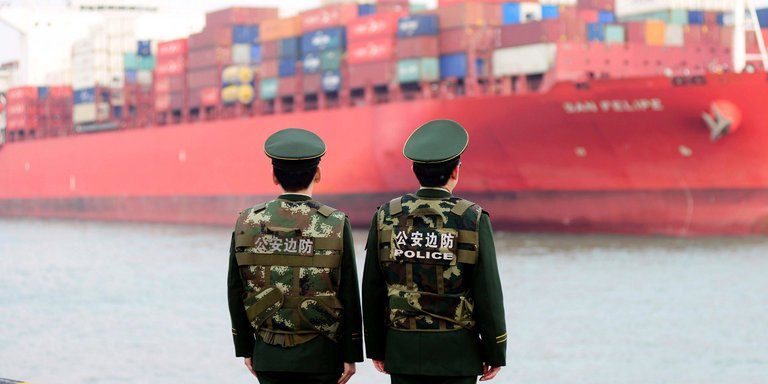 BEIJING — China announced Friday that it planned to impose tariffs on $3 billion worth of American-produced fruit, pork, wine, seamless steel pipes and more than 100 other goods, hitting back at the United States hours after President Trump proposed tariffs on about $60 billion worth of Chinese-made products.

The Chinese Ministry of Commerce issued the threat in an online statement that said its proposed measures retaliated against the Trump administration’s earlier decision to impose tariffs on Chinese steel and aluminum. The timing, though, also appeared to be a warning shot against Mr. Trump’s latest action on the trade front, on Thursday, when he took specific aim at a much wider range of Chinese products.

The Chinese tariffs would “balance out the losses sustained by China through the United States’ increased tariffs on steel and aluminum imports,” an unnamed Commerce Ministry spokesman said in the statement. “China urges the United States to resolve China’s concerns as soon as possible, resolve bilateral differences through dialogue and consultation, and avoid damage to the broader array of Chinese-U.S. cooperation.”

Under the planned Chinese countermeasures, American-produced fresh fruit, nuts, wine, seamless steel pipes and other goods would be the first to get hit, by 15 percent tariffs.

If Beijing feels it is necessary, another group of American-made goods would then draw 25 percent tariffs, including pork, which is a lucrative slice of United States exports to China. The statement said businesses and other parties had until March 31 to submit views about the retaliatory tariffs, meaning they would take effect only after that date.

“We do seem to be entering a trade war,” said Eswar Prasad, a senior professor of trade policy at Cornell University. “The U.S. has unsheathed its sword after an extended period of saber rattling and the Chinese are now unsheathing their weapons.

“I hope this will not spiral into a very broad set of sanctions on both sides,” Mr. Prasad added. “But I think, given Mr. Trump’s instincts and his very keen desire to deliver a political win whatever the political fallout might be, I don’t think it can be tamped down now.”

■ Trump’s threats have put President Xi Jinping of China on the spot.

In announcing the planned tariffs, the Commerce Ministry said China would also “take legal action within the framework of the World Trade Organization.”

The announcement, however, did not mention Mr. Trump’s latest round of tariffs aimed at Chinese-made goods, which the White House said Thursday was punishment for China’s use of pressure and intimidation to obtain American technology and trade secrets.

Notably, too, the list of 128 products that could be affected by Chinese tariffs did not mention soybeans, smartphones or other electronic products, leaving open the possibility that they would be hit by another wave of Chinese retaliation in reaction to Mr. Trump’s latest tariffs, or set the stage for negotiations to avert a trade war.

China’s ambassador to Washington, Cui Tiankai, said on Thursday that Beijing would retaliate against those tariffs on about $60 billion of Chinese goods.

“We do not want a trade war with the United States or with anybody else, but we are not afraid of it,” Mr. Cui said, according to Xinhua, the official news agency. “If somebody tries to impose a trade war upon us, we will fight. We will do whatever we can to defend the legitimate interests.”

The $3 billion worth of goods that Beijing plans to penalize represent just about 2 percent of U.S. exports to China, which amounted to $130 billion last year, according to Chad Bown, a senior fellow at the Peterson Institute for International Economics.

“It’s not devastating economically by any stretch, but it’s certainly going to hurt those interests in the United States that are trying to export,” Mr. Bown said. He pointed out that the retaliation by China sends “a negative signal, that they are not seeking to de-escalate things.”

Experts say that China picked its targets carefully by choosing goods that have political resonance. Much pork is produced in Nebraska and elsewhere in the Midwest, where Mr. Trump has strong support. Other items that could face tariffs are fruits and nuts that mostly come from California.

A version of this article appears in print on March 23, 2018, on Page A11 of the New York edition with the headline: China Plans New Tariffs In Retaliation To U.S. Policy . Order Reprints| Today's Paper|Subscribe