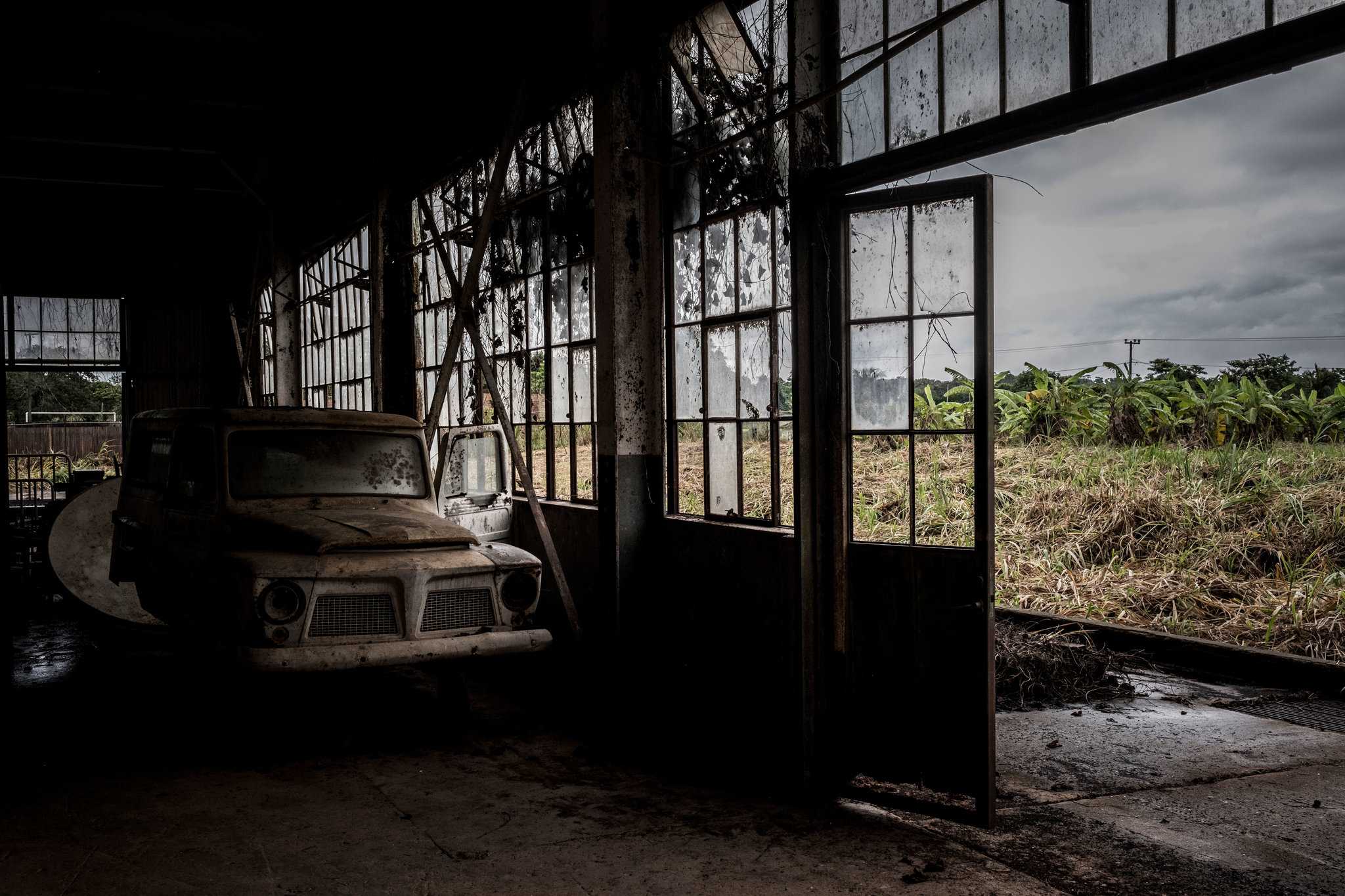 The Amazon offered its own challenges to the Americans. Some couldn’t adapt to the conditions here, suffering nervous breakdowns. One drowned when a storm on the Tapajós River toppled his boat.

Another manager left after three of his children died from tropical fevers.

Ford might have avoided such tragedies, and the ruinous management of the plantation, if he had sought counsel from specialists in caring for rubber trees or scholars of the Amazon’s capacity to thwart grandiose ventures. But he seemed to abhor learning from the past.

“History is bunk,” Ford told The New York Times in 1921. “What difference does it make how many times the ancient Greeks flew their kites?”

Given the scale of decay and decrepitude in this town — founded in 1928 by the industrialist Henry Ford in the far reaches of the Amazon River Basin — I didn’t expect to come across the stately, largely well-preserved homes on Palm Avenue. But there they were, thanks to the squatters.

“This street was a looters’ paradise, with thieves taking furniture, doorknobs, anything the Americans left behind,” said Expedito Duarte de Brito, 71, a retired milkman who dwells in one of the homes built for Ford managers in what was planned to be a utopian plantation town. “I thought, ‘Either I occupy this piece of history or it joins the other ruins of Fordlândia.’”

In more than a decade of reporting from Latin America, I made dozens of trips to the Amazon, lured back time and again by its vast rivers, magnificent skies, boomtowns, lost civilizations and tales of hubris consumed by nature. But somehow I never got to Fordlândia.

That finally changed when I boarded a riverboat this year in Santarém, an outpost at the confluence of the Amazon and Tapajós rivers, and made the six-hour trip to the place where Ford, one of the world’s richest men, tried turning a colossal swath of Brazilian jungle into a Midwest fantasyland.

I explored the outpost on foot, wandering the ruins and talking to gold prospectors, farmers and descendants of plantation workers who live here. Hardly a lost city, Fordlândia is home to about 2,000 people, some who live in the crumbling structures built nearly a century ago.

Ford, the automobile manufacturer who is considered a founder of American industrial mass-production methods, hatched his plan for Fordlândia in a bid to produce his own source of the rubber needed for making tires and car parts like valves, hoses and gaskets.

In doing so, he waded into an industry shaped by imperialism and claims of botanical subterfuge. Brazil was home to Hevea brasiliensis, the coveted rubber tree, and the Amazon Basin had boomed from 1879 to 1912 as industries in North America and Europe fed the demand for rubber.

But to the dismay of Brazil’s leaders, Henry Wickham, a British botanist and explorer, had spirited thousands of Hevea seeds out of Santarém, providing the genetic stock for rubber plantations in British, Dutch and French colonies in Asia.

These endeavors on the other side of the world devastated Brazil’s rubber economy. But Ford despised relying on the Europeans, fearing a proposal by Winston Churchill to create a rubber cartel. So, in a move that pleased Brazilian officials, Ford acquired a giant stretch of land in the Amazon.

From the start, ineptitude and tragedy plagued the venture, meticulously documented in a book by the historian Greg Grandin that I read on the boat as it made its way up the Tapajós. Disdainful of experts who could have advised them on tropical agriculture, Ford’s men planted seeds of questionable value and let leaf blight ravage the plantation.

Despite such setbacks, Ford constructed an American-style town, which he wanted inhabited by Brazilians hewing to what he considered American values.

Employees moved into clapboard bungalows — designed, of course, in Michigan — some of which are still standing. Streetlamps illuminated concrete sidewalks. Portions of these footpaths persist in the town, near red fire hydrants, in the shadow of decaying dance halls and crumbling warehouses.

“It turns out Detroit isn’t the only place where Ford produced ruins,” said Guilherme Lisboa, 67, the owner of a small inn called the Pousada Americana.

Beyond producing rubber, Ford, an avowed teetotaler, anti-Semite and skeptic of the Jazz Age, clearly wanted life in the jungle to be more transformative. His American managers forbade consumption of alcohol, while promoting gardening, square dancing and readings of the poetry of Emerson and Longfellow.

Going even further in Ford’s quest for utopia, so-called sanitation squads operated across the outpost, killing stray dogs, draining puddles of water where malaria-transmitting mosquitoes could multiply and checking employees for venereal diseases.

“With a surety of purpose and incuriosity about the world that seems all too familiar, Ford deliberately rejected expert advice and set out to turn the Amazon into the Midwest of his imagination,” Mr. Grandin, the historian, wrote in his account of the town.

These days, the ruins of Fordlândia stand as testament to the folly of trying to bend the jungle to the will of man.

Seeking to promote the automobile as a form of recreation — along with the golf course, tennis courts, a movie theater and swimming pools — managers laid out nearly 30 miles of roads around Fordlândia. But cars are mostly absent on the town’s muddy lanes, eclipsed by the motorbikes found in towns across the Amazon.

By the end of World War II, it was clear that cultivating rubber trees around Fordlândia could not be profitable in the face of leaf blight and competition from synthetic rubber and Asian plantations freed from Japanese domination.

After Ford turned the town over to Brazil’s government in 1945, officials transferred Fordlândia from one public agency to another, largely for unsuccessful experiments in tropical agriculture. The town went into a seemingly perpetual state of decline.

“Nothing happens here, and that’s how I like it,” said Joaquim Pereira da Silva, 73, a farmer from Minas Gerais State who followed his star to Fordlândia in 1997. Now he lives on Palm Avenue in an old American house he bought for 20,000 reais (about $6,670) from a squatter who fixed it up.

“The Americans had no idea about rubber but they knew how to build things to last,” he said.

Something about the failed utopia strikes a chord with scholars and artists in other parts of the world. Fordlândia inspired a 2008 album by the Icelandic composer Johann Johannsson and a 1997 novel by Eduardo Sguiglia about an Argentine adventurer who travels here to recruit plantation laborers.

Some descendants of workers who settled in Fordlândia, along with new migrants from other parts in Brazil, have small plots where zebu cattle graze. Others plant manioc in areas where rubber trees were chopped down decades ago. Many survive on small social welfare payments or pensions.

Then there are residents like Eduardo Silva dos Santos, born 66 years ago in the hospital conceived by Kahn, the architect who designed much of 20th-century Detroit. Mr. dos Santos now lives in a small house near the hospital’s ruins.

Scavenging material left by the Americans, he fashioned a fishing lantern from old car parts and a spice grinder from discarded machinery. Mr. dos Santos expressed mixed views of Fordlândia under American stewardship, growing up in the years after Ford unloaded the town.

“This place in Ford’s day was clean, no insects, no animals, no jungle in the town,” said Mr. dos Santos, one of 11 children born to a family that depended on the rubber plantation.

“My father worked for them,” he said, “and he did what they ordered him to do. Workers are like dogs: They obey.”

But to Ford’s dismay, sometimes they didn’t obey.

Managers tried enforcing the alcohol prohibition, but workers simply hopped on boats to a so-called island of innocence nearby with bars and brothels. And in 1930, workers fed up with eating Ford’s diet of oatmeal, canned peaches and brown rice in a sweltering dining hall staged a full-scale riot.

They smashed time clocks, cut electricity to the plantation and chanted, “Brazil for Brazilians; kill all the Americans,” forcing some of the managers to decamp into the jungle.

The Amazon offered its own challenges to the Americans. Some couldn’t adapt to the conditions here, suffering nervous breakdowns. One drowned when a storm on the Tapajós River toppled his boat. Another manager left after three of his children died from tropical fevers.

Ford might have avoided such tragedies, and the ruinous management of the plantation, if he had sought counsel from specialists in caring for rubber trees or scholars of the Amazon’s capacity to thwart grandiose ventures. But he seemed to abhor learning from the past.

“History is bunk,” Ford told The New York Times in 1921. “What difference does it make how many times the ancient Greeks flew their kites?”