‘Refusal to Approve N15.37bn Loans Behind Oshiomhole’s Tirade Against Okonjo-Iweala’ 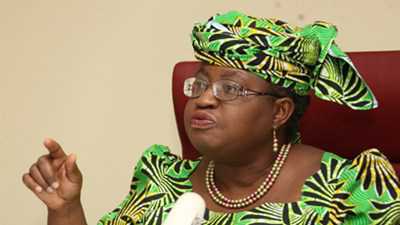 • Edo Govt: It’s a weak attempt to whip up sentiments

Davidson Iriekpen in Lagos and Ndubuisi Francis in Abuja   â€¨
The recent spate of allegations against the immediate past Coordinating Minister for the Economy and Minister of Finance, Dr. Ngozi Okonjo-Iweala, by the Edo State Governor Adams Oshiomhole may not be unconnected to the refusal by the former to grant loan requests by the governor to pursue financial obligations, which the then minister considered inimical to the interest of Edo State, it has been revealed.

Documents unearthed by THISDAY from sources in the Debt Management Office (DMO) showed that the Edo State governor had in a letter dated December 9, 2014 requested a “No Objection” for facilities totalling N15.37 billion, which were turned down by DMO and the minister.

However, investigations revealed that all the loan requests were turned down by the Ministry of Finance under Okonjo-Iweala following the assessment and guidance provided by DMO, which observed that the loans would be inappropriate and ran contrary to the existing guidelines.

The former minister felt strongly that approving the requests could put Edo State in a very difficult position.
The first reason for her decision to decline the request, according to a source in DMO, was that it was wrong for the state government to obtain a commercial loan and repay same via a World Bank disbursement, which Edo State was expecting.

She had through the DMO communicated her reservations that using a concessional World Bank facility with a 25-year tenor and a five-year grace period at 1.25 per interest rate to pay for a commercial bank loan of 23 months tenor and 18 per cent interest rate was not only irregular but was not economically sustainable.

“In fact, World Bank rules abhor the use of the institution’s facilities to offset commercial loans,” the DMO had said in another letter in response to the Edo State Government.

However, Okonjo-Iweala, investigations further revealed, did not just reject the loan applications but actually offered some other solutions, including borrowing a smaller amount through a N5 billion bond with a lower interest rate than a bank loan. But Oshiomhole rejected this option.

THISDAY learnt that Edo State was not the only state whose loan applications were not approved by the former minister. Several other states also had their applications rejected based on the results of the Debt Sustainability Analysis (DSA) carried out by the DMO.
In some cases, the applications were not in line with extant rules and procedures.

Sources told THISDAY that Oshiomhole’s sudden repeated attacks against Okonjo-Iweala were indicative of the fact that he took the minister’s rejection of the application very personally, as he desperately needed the funds before the 2015 elections.

THISDAY investigations also showed that he was displeased with the publication of what the states as well as the federal government got from the Excess Crude Account (ECA) between 2011 and 2014 because it put the information into the hands of Edo citizens to whom he had been crying that he did not have enough money because the government at the centre was denying the state its due from the ECA.

The governor opened his floodgate of attacks against Okonjo-Iweala shortly after the general election when he asked the former minister to explain the whereabouts of $30 billion.

Shortly after, he came up with another allegation of $20 billion, $10 billion, N720 billion and $2.1 billion, which he claimed were missing from the ECA and other sources.

On Monday, he levelled another allegation, accusing the former minister of using $1 billion from the ECA to fund the re-election of former President Goodluck Jonathan, an allegation which Okonjo-Iweala vigorously denied and described the governor’s allegation as a symptom of “numerical diarrhoea”.

However, when confronted with the documents in THISDAY’s possession, the Edo governor’s media aide, Kassim Afegbua, dismissed the reference to the loans requested by the governor.

He described it as a weak attempt to whip up sentiments with the intent of masking the real issue which was the illegality perpetrated by Okonjo-Iweala “who was dipping her hand in collusion with the president into the ECA and spending money against the provision of our laws which make it mandatory for the National Economic Council (NEC) to approve withdrawals from the ECA”.

He said: “Oshiomhole has not been making reckless accusations. Why are the minister and her co-travellers begging the issue? Are they saying Okonjo-Iweala’s dipping her hands into the ECA is acceptable under our laws?

“Are they saying that the former minister is at liberty to take money from the ECA to pay subsidy claims without the required approvals? Does she have the right to take money from the ECA running into several billions?
“Oshiomhole is not raising dust over nothing; the funds in the ECA is owned by the federal government to the tune of 52 per cent, while the states and the local governments own the balance 48 per cent.

“Under our laws, the president can’t spend the federal government’s funds without the approval of the Federal Executive Council (FEC).”
He maintained that Okonjo-Iweala had changed her position on this issue up to four times, indicating that she must have something to hide.

According to him, “This is simple logic, since you have been publishing the disbursement of the funds to the various state governments from the ECA, what stops you from also publishing the accruals into the same account?

“She needs to tell us the law that allows you to spend the funds in the ECA without permission. She initially said FAAC gave the approvals and FAAC said they did not and the she changed her position and said it was the president who gave the permission, but is the president permitted to do that? The answer is no.

Kassim added that states were compelled to ask for loans for legitimate projects because the right allocations that should have accrued to them were being “stolen by Okonjo-Iweala and her cohorts”.

“They mismanaged the economy and plundered our collective patrimony with reckless abandon. She was indeed the coordinating minister of economic fraud and financial malfeasance,” he stated.