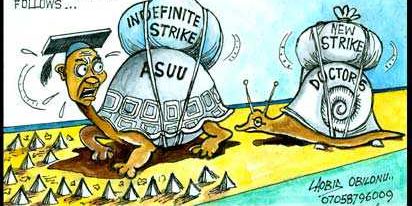 Minna- Two former Military Head of State, General Abdulsami Abubakar and General Ibrahim Babangida has called on the Academic Staff Union Of Universities and the Federal government to reconsider their stand on the ongoing strike in order to avert total collapse of education in the country

The duo spoke with journalists shortly after paying sallah visit to the state governor, Dr. Muazu Babangida Aliyu at his residence in Minna on Friday.

General Abubakar who spoke extensively on other nagging national issues including security, oil theft among others also called on all other unions already on strike or warming up to enter into dialogue with the relevant authorities to avoid the collapse of the nation’s economy.

General Abubakar said, “I believe that strike is a normal issue but I think we are overdoing it in this country because in other developed countries, strike is done within 24 hours aimed at drawing attention to their plight. Nigerians are already feeling the pinch of these strike actions and so government and these strikers should look at how these issues can be resolved immediately.”

The former Head of State said government should not have allowed the strike to linger on for so long and therefore called on it to look into their demands and address them accordingly regardless of its dwindling resources.

According to him, “Government should look into these various issues and demands and address them accordingly regardless of the dwindling resources of the country and similarly, the strikers should also look at the coffers of government and try to be reasonable in their demands.”

He noted that the various unions had made their points and therefore urged them to go back to work pointing out that if the strike continues, they might eventually lose the sympathy of the people.

General Babangida who also spoke in the same vein also called on the striking unions to sheath their swords in the interest of parents, students and other affected Nigerians.

Speaking on security, General Abubakar said it is the business of all Nigerians and should not be left in the hands of government and security agents alone and therefore called on the public to always pass on relevant informationregarding security to the authorities. Just as he also called on the security agencies to always protect sources of their information in order to give more room for more information.

General Abubakar those involved in the constant oil theft as unpatrotic and urged them to abandon the business in the interest of the economy of the nation.

“I look at the ongoing development as very sad and look at the people as very unpatrotic. To them, they think they are getting their share of the national cake by stealing whereas they are not. I want them to have a rethink and search their conscience and turn a new leaf so that we can have a peaceful and developing country”

He however allayed the fears of the ongoing problems facing the country saying, “God has joined us together and whether you break Nigeria into pieces, we will still remain joined by our umbilical cord because our umbilical cord is still there and we will continue to live together either as neighbours or as communities.”