REASON WHY ONE NIGERIA CANNOT WORK 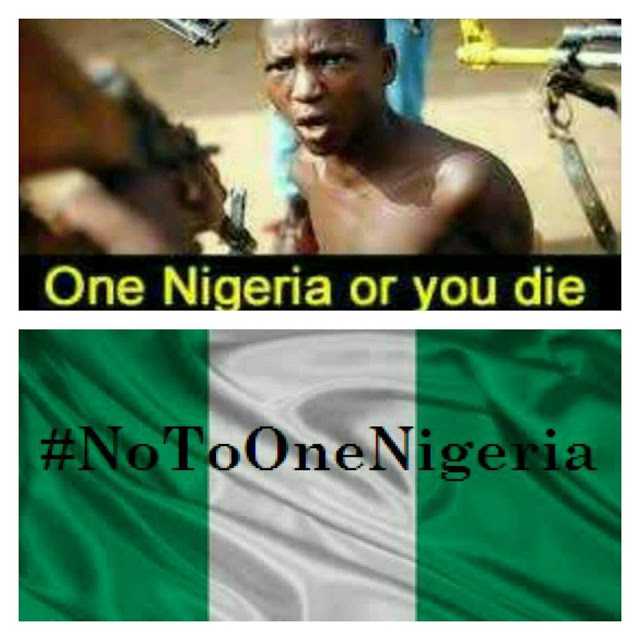 REASON WHY ONE  NIGERIA CANNOT WORK.

The contraption and zoo called Nigeria was concocted by her colonial master Britain to self-destruct. Barely 1229 months today, Biafra this unholy marriage have refused work.

35years into the illegal marriage in 1945,it struck,the sign that this abominable contraption(Nigeria) will never work surfaced as the bloodBiafranmen,women and children were unwarrantedly spilled in streets of northern Nigeria by their fellow countrymen(Hausa/Fulani oligarchy) who believe that they were chosen by providence to rule and lord it over the helpless and vulnerable ethnic nationalities lumped together in that zoo.
Despite that reality check, were forced by the blood sucking and demonic colonial masters swept it under the carpet and marriage continued. 1953 it happened again, guess what,t he blood of Biafran men and women were used to pacify the jerking marriage that is not working. While we were nursing our wounds, marginalisation, disenfranchisement, right infringement, dehumanisation, ethnic cleansing, religious bigotry and economic emaciation were fired on us by our so-called fellow countrymen. Not sooner than 1966,w hen the pogrom happened. Our people were hunted and killed wantonly in their thousands in the streets of northern and western part of the zoo.  Forced our leader then, Gen. Dim. Odumuegwu Ojukwu to appeal for confederation which was refuted, then he declared the independent of the sovereign nation of Biafra. But because of the demonic nature of the other parasitic(west and north) that were sucking the resources in Biafraland, B retain coarse them to declare war on us.
The result of that was the biggest tragedy and genocide in history after the Jews holocaust,t hat was mate were forced on us. We again into the frying pan. And forty-seven years now, It has been marginalisation, dehumanisation, deportation, disenfranchisement and decimation.

WHY THIS MARRIAGE HAD NEVER WORKED AND CAN NEVER WORK.

DIVERGENT VALUE SYSTEM:  The keys to nationhood is value system. When people who have the shame culture,t hey value the same thing,t hey think in the same direction, etc. this course, When they come together to pursue one goal,t hen you can call them a nation. But in the case of the contraption(Nigeria), it is not so. People from different ethnic nationalities with divergent value systems were lumped together uninformed by the colonial bitches from Britain, and now the marriage has done more harm than good.

LACK OF NATIONAL VISION: The criminals in the political driver-seat of this useless lorry called(Nigeria) couldn’t tell us where they are taking to, is and they don’t know themselves. They keep recycling in frustration with no sense of direction. Bible said where the was no vision people will throw off self-restraint:.people will have no reason to stay together and discipline themselves during this course.

Edited and Published by Uchechi  Collins

Biafra: The Price For Freedom Is Priceless
12th October 2021
Go to Top
Posting....