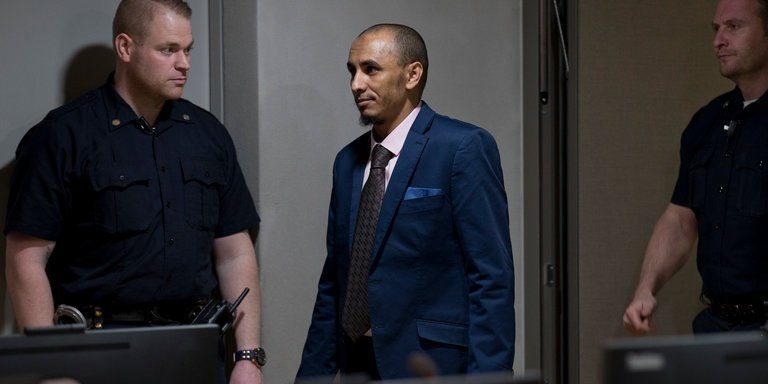 PARIS — A jihadist fighter from Mali was brought before the International Criminal Court on Wednesday to face charges of rape, torture and sexual slavery, crimes that prosecutors say were perpetrated while he was the head of the police during a jihadist occupation of the ancient city of Timbuktu.

At the hearing in The Hague, prosecutors said that Al Hassan Ag Abdoul Aziz Ag Mohamed Ag Mahmoud, 40, had committed crimes against humanity and war crimes in 2012 and 2013 by abusing, whipping and torturing residents who violated strict religious laws.

He forced young women to marry jihadist fighters, “which led to repeated rapes and sexual enslavement of young women and girls,” they said.

Officials say girls were forced into marriages, some lasting only a few days or a few weeks, in an attempt to provide a justification for their being forced to have sex. “If a girl ran away, she would be tracked down and brought back,” said a lawyer working on the case, who spoke on condition of anonymity because he was not authorized to discuss the details. “Children were born from these forced marriages.”

The case has renewed a focus on continuing abuses by Islamist extremists, including those who have attacked ancient sites of religious and cultural significance. Timbuktu, now a Unesco World Heritage Site, has been a renowned center of Islamic civilization for centuries.

It is also expected to draw heightened attention to the deteriorating security situation in large parts of sparsely inhabited and parched regions of sub-Sahara Africa, where armed rebel groups, including jihadists and criminal gangs, often hold sway.

The situation in Mali and the larger Sahel region have increased in importance for the West, as not only poverty but also jihadist violence have forced people to flee. Traffickers have brought thousands of migrants to the Mediterranean coast, using it as a springboard to cross over to Europe.

In 2012, sweeping across northern Mali, the armed groups seized control of Timbuktu and other towns and “imposed their vision of religion, through terror, on a local population who did not adhere to it,” the warrant for Mr. Al Hassan’s arrest said.

Mr. Al Hassan, who had about 40 jihadist police officers under his control, took part in the lashings of men and women and also played a role in the destruction of local shrines of Muslim saints that were deemed idolatrous, according to court documents. Mr. Hassan was not asked to enter a plea at the hearing.

Asked if he had anything to say, he complained that he was held in a single cell with a camera, which he said violated his privacy and his dignity.

He is the second member of the Ansar Dine jihadist group to appear before the court at the request of the government of Mali, where most people practice a moderate form of Islam.

In 2016, Ahmad al-Faqi al-Mahdi pleaded guilty to smashing Timbuktu’s holy shrines and was sentenced to nine years in prison. He was also ordered to pay close to $3 million in reparations.

The arrival of Mr. Al Hassan last weekend was a boon for the court, which is winding up its current cases. It has multiple investigations underway, but a large staff of prosecutors and judges could run out of work if the world’s first international criminal court cannot get hold of more fugitives.

Created in 2002 to deal with war crimes, crimes against humanity and genocide, the court depends on governments to enforce its arrest warrants; at least 12 warrants are outstanding, and more are believed to exist but remain under seal.

Mr. Al Hassan was arrested a year ago by French troops tracking jihadists in the north of Mali. His capture was fortuitous, as he was not the target of the operation.

Handed over to the Malian authorities, Mr. Al Hassan was detained until the court prepared and issued a sealed arrest warrant asking him to surrender. Last Saturday, he was sent to The Hague.

The Mali cases have their roots in 2012, when armed rebels and homegrown Islamic jihadists set up a ministate in Northern Mali around Timbuktu that lasted about a year.

In 2013, French and Malian forces pushed them out of the towns where they had held sway. But until today, the state has had little control over large areas of northern and central Mali.

Peacekeepers and police officers from the United Nations who are now stationed in Mali concede that they cannot control the country’s vast terrain or fully suppress jihadist or other rebel groups.

Western diplomats say that the security situation in Mali has steadily deteriorated and jihadists have stepped up their activities.

They say the jihadists continue to offer weapons and money to young men in the vast and impoverished desert region. And the groups can move with relative ease across the borders where Mali, Burkina Faso and Niger meet.

In January, amid growing concern, defense ministers from the Sahel, as well as France, met in Paris in the latest push to step up antiterrorism operations in the vast region.

They said they hoped to have a new military force in place this year drawn from troops in the region — including Chad, Mauritania, Mali, Niger and Burkina Faso — to work alongside United Nations peacekeepers and the French military mission in Mali.

The so-called G5-Sahel Force will be funded mostly by Saudi Arabia and the European Union.