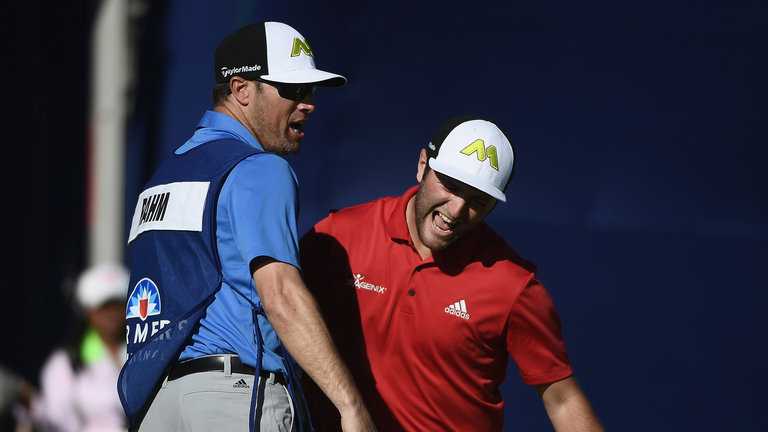 Jon Rahm produced an astonishing finish to clinch his maiden PGA Tour title with a three-shot victory at the Farmers Insurance Open.

Rahm was three shots off the lead when he reached the turn after a steady outward nine on the final day at Torrey Pines, but he eagled two of the last six holes including a thrilling 60-foot putt for a three at the 18th to cap a superb 65.

The Spaniard, who also birdied the 12th and 17th as he stormed home in just 30 blows, was the one player to break clear from a congested leaderboard as he posted a winning score of 13 under par – making him the first man to win his maiden title at this event since Jay Don Blake in 1991.

Rahm is also the first champion to make an eagle at the 72nd hole since Tiger Woods collected the first of his seven wins in San Diego back in 1999, and the former world amateur No 1 can now look forward to a trip to the Masters in April.

Defending champion Brandt Snedeker and halfway leader Justin Rose were among a lengthy list of players jostling for the lead throughout the final round, while Keegan Bradley set the early clubhouse target at nine under when he fired a 67 which featured a superb hole-out from 147 yards for eagle at the 14th.

Rahm moved to nine under when he birded the 11th, and a stunning iron from a fairway bunker found the green in two at the par-five 13th which he converted from 20 feet for his second eagle of the week on that hole.

The 22-year-old then set up a birdie at the penultimate iron following a precise wedge to five feet, and his five-wood second to the last comfortably cleared the water and settled in the fringe at the rear of the green.

After meticulously lining up the double-breaking putt from over 60 feet, Rahm judged the pace and line to perfection and celebrated wildly with his caddie after his ball dropped in the right side of the cup dead weight, earning him the low round of the day.

American journeyman Charles Howell III also eagled the 13th and birdied the last to close out a 68 which got him to 10 under, while Taiwan’s CT Pan claimed a share of second to record his best finish on the PGA Tour, although he would have been disappointed to par the final eight holes after three consecutive birdies around the turn.

Rose had to be content with a tie for fourth with Bradley, Pat Perez, Patrick Rodgers and Tony Finau after the Englishman offset four birdies with two bogeys in a two-under 70.

Snedeker failed to recapture the magic that gave him a remarkable victory in stormy conditions 12 months ago as he laboured to a one-over 73 to finish five shots off the pace.

Phil Mickelson started the day just four shots adrift, but his challenge ended with bogeys at 14 and 15 although he did manage to birdie the final two holes to salvage a 70 and close on seven under par.