Radio Biafra: an enigma to the corrupt Zoo and the pedophile terrorist, Buhari 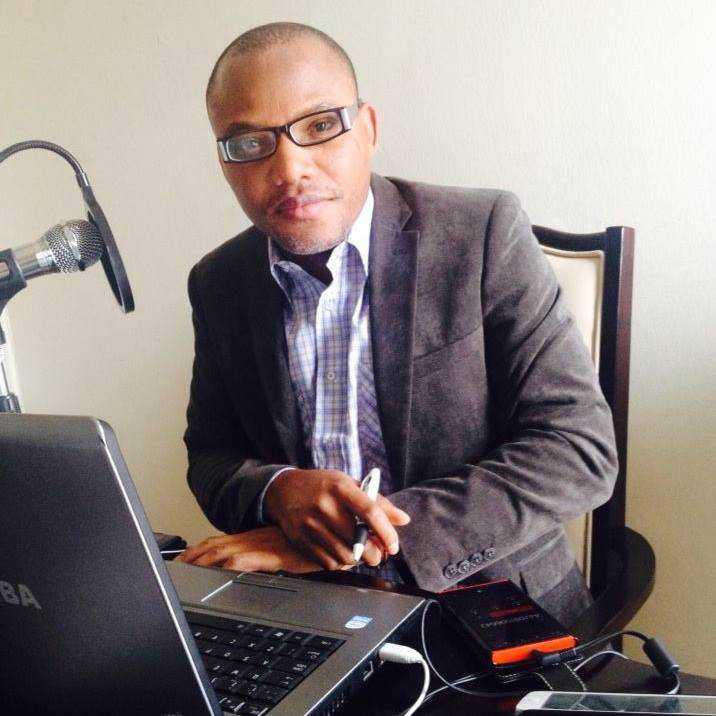 Everything changes except change itself, and the change in this case is God. The Zoo (Nigeria) will by the grace of Chukwu Okike (God, the Creator), expectedly experience a monumental alteration commensurate to the required surgical expedients to correct the numerous ills that contributed to the Zoo’s current deplorable and dilapidated state of affairs. Of course, a by-product of a man will definitely have a manufactured date as well as expiry date albeit the product’s shelf life has indeed, over-stretched its terminal date. In the light of the above, and in cognizant of the recent propaganda as banded about by the agents of the product of Fredrick Luggard, the Punch columnist, Azuka Onwuka, wrote remarkably on the “not-so-good” professional approach of the pedophile’s media team to the enigma called Radio Biafra – a pacesetter Radio station premised on the Truth and “in defense of freedom.” Onwuka succulently noted that:  the promoter of Radio Biafra, Nnamdi Kanu, would be very grateful to President Muhammadu Buhari for the great favour done him last week. In the past two years, Kanu had been broadcasting to Nigeria from outside the country with many people not paying attention to him. Former President Goodluck Jonathan ignored him completely.

Then, last week Buhari took actions that catapulted Kanu and Radio Biafra from obscurity to global attention. On Tuesday, the BBC, CNN, Al-Jazeera, VOA, Deutsche Welle, as well as all the Nigerian TV and radio stations and newspapers started reporting the news from the Ministry of Information that the National Broadcasting Commission had jammed the signals of Radio Biafra. Curiously, the radio station continued to broadcast to the people: giving itself some air of invincibility.

The next day, presidential spokesman, Garba Shehu, denied an allegation from Radio Biafra that President Buhari was anti-Igbo. The Nigerian news media carried the story very well. Funny enough, in the news story, the Presidency called Radio Biafra “pirate radio” as well as “illegal radio”. Yet, the Presidency left all important state functions to respond to such a radio station.

Not done yet, on Friday the NBC announced that the Department of State Services had arrested the key engineer of Radio Biafra. Kanu fired back that none of its engineers had been arrested.

These three acts that happened in one week were public relations blunders that were completely unnecessary.

First, there was no need to announce that Radio Biafra’s signals had been jammed. The NBC should have done its work quietly. The announcement, which was meant to be a chest-thumping act, ended up giving unnecessary publicity to Radio Biafra. Those who had never heard of the existence of the station heard about the radio and began to enquire how to listen to it.

For those actions from the Federal Government, Radio Biafra was the most discussed issue last week among Nigerians. Even the suicide bombings that occurred during the Eid-el-Fitri prayers or the trip of Buhari to the US did not attract the type of attention Radio Biafra and Kanu attracted.

Given that Buhari had to respond to an allegation from Radio Biafra that he was anti-Igbo, it showed that he does not want to have such a tag. But how has he worked to ensure that he does not have the anti-Igbo image? Let’s look at some of his key actions.

Before the 2015 elections, the worst minus Buhari had in the south of Nigeria, especially from the South-East and South-South, was that he was too pro-Islam and pro-North to be fair to all sections of the country. This perception was based on his past comments and actions. Consequently, he got extremely low votes from these two zones. Upon assumption of office, one would have thought that he would take immediate steps to prove that perception wrong and win these two zones to his side. One way was to make these areas the first places to visit. The petrol tanker fire in Onitsha in June was an opportunity. But he sent his deputy, Vice-President Yemi Osinbajo. If Buhari had visited Onitsha himself, it would have made a world of difference. Then last month, the University of Port Harcourt had its 30th convocation ceremony. The Executive Secretary of the National Universities Commission, Professor Julius Okojie, represented the President, who is the Visitor to the University, at the event. It would have been a perfect opportunity for Buhari to show the South-South that all the stories spread about him not liking the South-South were false.

Currently, the most important project to the South-East people is probably the Second Niger Bridge. Imagine if the President had visited the site within a month of his inauguration to see if indeed work was going on there? Imagine if he had made a firm statement at the site that he would ensure that the bridge was completed in record time to alleviate the pains of those travelling between Onitsha and Asaba?

But in a country where ethnic and religious sentiments run deep, Buhari has made over 90 per cent of his appointments from the North. Even though he still has many appointments to make, what these early lopsided appointments had done was to make his detractors say: “Did I not tell you so?”

Some people are asking that the President be given some more time. But as it is said: there is no second chance to make a first impression. Any appointment Buhari makes now from the South-South, South-East or even South-West will be seen as “trying to fulfil all righteousness.” A person with a deeper understanding of human nature would have started by making more appointments from the southern parts of Nigeria than from the North. That would have shut up the naysayers. When he had wormed his way into the hearts of the South, he would have quietly made the key and reserved appointments from the North, and nobody would have complained. Those who had worked against Buhari’s election would have rapidly become his brand ambassadors.

Does it mean that after creating Dr Nnamdi Azikiwe, Chief Obafemi Awolowo, Sir Ahmadu Bello, Chief Dennis Osadebay and their contemporaries, God began to create low-quality leaders for Nigeria? No!

Something terrible happened to Nigeria’s growth in 1966 when the unitary government was introduced and sustained ever since, even though it is referred to as a federal system only in name.

The last National Conference came up with some noble decisions that would reduce rancour and encourage healthy competition and progress in Nigeria if implemented. Will President Buhari jettison the decisions of that conference because the All Progressives Congress refused to participate in it, even though most of the decisions were issues the APC and the parties that formed it have been clamouring for?

We will continue hoping for exceptional results from our leaders but getting disappointed. The faulty structure will continue to cause anger and frustration in people, leading to agitations and strife as well as national stagnation or retrogression.

If nothing is done about restructuring Nigeria, some years from now, Buhari may have joined the list of presidents that we are angry with for not meeting our expectations, and we will be back in the valley of decision, searching for the Messiah that will be like the leaders we had in the 50s and 60s.

I wish Nigerians luck in their never-ending search and hope.