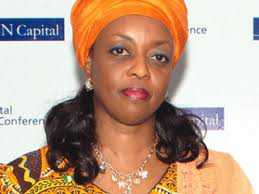 Members of the House of Representatives Committee on Finance have called on the Minister of Petroleum Resources,

The lawmakers, who would begin oversight of government agencies soon, said they would intensify oversight on the petroleum sector and its agencies, especially the Nigerian National Petroleum Corporation, NNPC.

Speaking in Abuja, the Chairman, House Committee on Finance, Abdulmumin Jibrin, who wondered why questions were not being asked about the quantity of crude oil being produced from the country, said the amount of money being talked about here “comes from the oil sector and crude sales.”

He said: “I think it is hasty for (members of) the Nigerian Governors’ Forum, NGF, most of whom we have been working together with before now, to call for the resignation of the minister (Dr. Ngozi Okonjo-Iweala). I believe that is inappropriate; looking at the background of the issues that are involved.

“We are missing the point because where we should put our searchlight and lay more emphasis on is the petroleum sector; the NNPC. It is the Minister of Petroleum (Alison-Madueke) that should be called to give account of what is happening. It is not the Minister of Finance.

“Substantially, the amount of money that we are talking about comes from the oil sector, from crude sales, and until today, we keep talking. How much are we even producing per day? Nobody knows the quantity of crude oil that is being produced in this country. Nobody knows, and nobody is asking the Minister of Petroleum any question.

Jibrin added that the accountability, the transparency rate in NNPC was very low.

He said: “The system is still shrouded in absolute secrecy. Nobody understands how they operate, and these are the issues Nigerians should be raising questions over.”

The lawmaker, who wondered why Nigerians are quiet about what is going on in the oil and gas sector, said: “I think that attention should move from Ngozi Okonjo-Iweala to Diezani, the Minister of Petroleum Resources. I think all Nigerians should stand up and ask her questions.” Jibrin noted that cases were rife of massive oil theft and corruption in the oil and gas sector, even as he advised the NGF Chairman, Governor Rotimi Amaechi, and his colleagues to take a second look at the matter, articulate their position and present it to the Minister of Petroleum Resources.

Also, the Rivers State Governor Amaechi has fired back at the Minister of Finance and Coordinating Minister of the Economy, Dr. Ngozi Okonjo-Iweala and Delta State Governor, Dr. Emmanuel Uduaghan over their comments on the nation’s economy and South- South support for President Jonathan.

According to him, the Federal Government is yet to pay fully the Rivers State allocation for the month of July.

Amaechi spoke at a programme organised by the Rotary International, District 9140 for young future leaders at the Rivers State University of Science and Technology, Port Harcourt, on Thursday.

On Governor Uduaghan’s remarks that opposition to President Jonathan should not come from the South-South region, Amaechi stated that he considers Nigeria’s national interest far and above any other (regional) interest.

This was as he challenged young men and women to become interested in governance issues and demand and get responses from those in government.

He bemoaned the fact that those fighting a just cause were being maligned on the altar of public criticism, stating also that Nigerians suffer from the effects of people not asking relevant questions.

“When you are principled in Nigeria and you stand on your principles, what do they call you?” ‘Stubborn’, the audience chorused.

“We (NGF) asked the Minister for Finance to resign if she is not able to manage the economy and she replied that ‘I dey kampe’. As at now, we are yet to receive complete, the federation allocation for July.

“How strong is an economy that cannot fund its statutory state and federal governments’ allocation? Our entitlement as Rivers State Government in July was N19 billion, they have paid us only N14 billion, you get the point?

“Now, why am I saying this to you? I am saying it because as potential leaders, you must learn to ask questions. If you think that the youths spur me, you don’t, you don’t inspire me. Why don’t you inspire me? Because you are learning to be like us. Let me paint the image of us – corrupt, poor leadership, that’s what you are copying…”

‘Iraq, Syria’, the crowd chorused. “Maybe, Syria. So, you see our peers: Syria, Iraq, Pakistan. I am sharing experiences with you before I talk about the issue of leadership.”

“Now, I read today’s paper and my friend, Governor Uduaghan says anybody who is from South-South should not oppose our President, should not have a different view from our president. Did you read it? I will reply him but let me start replying him from here. First, I am a Nigerian. The reason why you have South-South, South-West, South-East, North-West, North-East and North Central is because in Nigeria, what you have in leadership is a wreck culture. I would have brought you a book titled ‘It’s our turn to eat’ in Kenya. In Nigeria, it should be…, ‘It’s our turn to chop’.

“Now the reason why you have this South-West, South- East, North-West, North this, North that, and all that, is because you have a wreck culture where all we care about is how to share the till. So, South-South has shared for four years, how many of you have benefitted from the sharing for four years, raise your hand, how many of you?” ‘None’,” the crowd again chorused. “So none. How many of you passed through East-West road, how was the road”. “Bad”, they again chorused. “And our President is from South-South, so you see why I should support the President? “No ooo,” the crowd chorused again.

“So, the basic rule is that none of us should oppose our President if you are from South-South, that is what the man (Uduaghan) tells us…”

He urged the youths to arm themselves with education to revive Nigeria, which he said is comatose, expressing sadness that the country’s poverty rate had risen to an unbearable level where many Nigerians hardly get enough to eat.