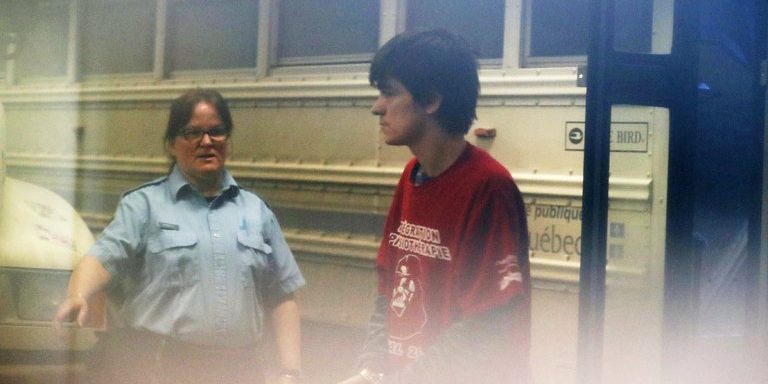 MONTREAL — A former university student who killed six men at a mosque in Quebec City early last year pleaded guilty to first-degree murder on Wednesday, hastening the conclusion of a case that shocked Canadians and underscored the presence of Islamophobia in multicultural Canada.

“I’ve thought about this a long time. In my heart, this is the decision I’ve made,” the gunman, Alexandre Bissonnette, 28, told a Quebec City courtroom, after previously pleading not guilty.

Several of the victims’ family members sobbed openly in court after the judge read out the names of the six men killed in the attack, in which five others were seriously wounded, according to Mohamed Labidi, the president of the mosque, the Islamic Cultural Center of Quebec, who attended the proceedings.

Among those in attendance was Aymen Derbali, who was left paralyzed after being shot seven times when he tried to distract Mr. Bissonnette by staring directly at him so he would stop shooting others. The gunman’s parents were also in court as their son read out his guilty plea.

Mr. Bissonnette’s transformation from a seemingly soft-spoken politics student into a methodical killer shook Canada, a country that celebrates its tolerance and openness to immigrants. And with a trial averted, many questions remain unanswered.

Speaking in court, Mr. Bissonnette said he was neither a terrorist nor Islamophobic but had been “carried away by fear and a horrible form of despair,” according to the CBC, the Canadian broadcaster.

In an open letter published in January, the gunman’s parents, Manon Marchand and Raymond Bissonnette, called the crime “inexcusable” and “unexplainable.” “Like all parents we hoped to see him succeed and be happy in life,” they wrote.

Mr. Bissonnette faces a prison sentence of up to 150 years.

Although Prime Minister Justin Trudeau initially characterized the shooting as a “terrorist attack on Muslims,” Mr. Bissonnette was charged with murder rather than terrorism, and law enforcement officials have said that he was not part of a larger network.

After the attack, some of his friends told the Canadian news media that Mr. Bissonnette, a student at Université Laval, had been bullied at school as an adolescent and had eventually become in thrall to far-right anti-immigrant groups.

Mr. Labidi, the mosque’s president, on Wednesday called the guilty plea a relief as it spared the victims’ families from enduring a painful trial. “This way they won’t have to relive those terrible events during a long and protracted trial, so this brings some measure of comfort,” he said.

In an interview last week at the mosque, its windows still pocked with bullet holes, Mr. Labidi said the gunman had staked out the building for days before storming it around 8 p.m. on Jan. 29, 2017, just as evening prayers were coming to an end — a time when the mosque was thronged with people.

After entering the building, Mr. Bissonnette went directly to the prayer room and began shooting, Mr. Labidi said. Worshipers were overcome with terror, and some hid in the basement, he added. Mr. Bissonnette’s gun eventually jammed as he fled, averting even greater carnage.

“We are still trying to come to terms with what happened,” Mr. Labidi said, adding that the attack had deeply shaken Quebec’s Muslims and highlighted growing fissures in Quebec society, including intensifying Islamophobia.

The mosque had also been targeted in the months leading up to the shooting, including an incident in which someone left a severed pig’s head on its doorstep. And in August, Mr. Labidi’s car was set on fire outside his home, 36 hours after he announced plans for the building of a Muslim cemetery on city-owned land.

While some European countries have experienced revenge attacks against Muslims after a spate of terrorist strikes undertaken by radical Islamists, such instances are rare in Canada, where far-right groups have not resonated widely.

Mr. Labidi noted that Quebec’s Muslims, many of whom are from northern Africa, had been warmly welcomed. Nevertheless, he said, anti-immigrant sentiment had been on the rise in recent months, and he blamed right-wing “trash radio” programs and far-right groups such as La Meute, or Wolfpack, which calls Islam a threat to Quebec’s way of life.

While Canada prides itself on embracing immigrants, the group has resonated with a small but vocal minority in Quebec, where a strong tradition of secularism was ingrained during a revolt against the Roman Catholic Church in the 1960s. The group’s animus has been particularly reserved for conservative Islam.

Last year, the Quebec government caused an outcry when it introduced a law on “religious neutrality” requiring that people show their faces when using or providing public services in places like buses, libraries and universities. Human rights advocates say the law unfairly singles out Muslim women who wear veils.

In December, the Quebec City police chief, Robert Pigeon, said that the number of hate crimes or hateful episodes aimed at Muslims or Muslim institutions had doubled in the previous 12 months.