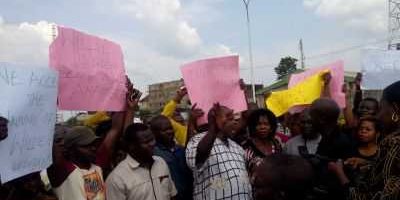 Protesters this afternoon took to the streets in parts of Anambra to express their displeasure over the decision of the Independent National Electoral Commission (INEC) to declare the APGA gubernatorial candidate, Chief Willie Obiano, governor-elect.

Though Obiano (174,710 votes) beat PDP’s Comrade Tony Nwoye (94,956 votes) in the election held over the weekend, INEC refused to declare him winner on the grounds that the margin of victory was lower than the number of cancelled votes. It announced that a supplementary election would be held in the affected areas.

Ifeanyi Muofunanya, Chairman, Awkuzu Youths Association, who led a group of protesters at Awkuzu Junction in Oyi local government, however, disagreed. “We are giving INEC 24 hours to declare Chief Willie Obiano the winner,” he said amidst shouts of approval from the protesters, who brandished placards in favour of Obiano.

“Anambra has been a peaceful state. The election that took place on Saturday was unanimously declared as peaceful, free and fair by every observer. Why did INEC declare the results inconclusive? The youths of Anambra State are running out of patience. If INEC does not declare Willie Obiano the winner in the next 24

hours, we cannot guarantee what will happen in Anambra State,” Muofunanya added.

Protests were also reported in parts of Onitsha South, Umunnachi and Umudioka.

Reacting to the news of the protests, Comrade Emeka Umeagbalasi, Board Chairman of the International Society for Civil Liberties & the Rule of Law (Intersociety), said the protesters were exercising their right. He, however, warned that their request is not in Obiano’s interest.

According to the Onitsha-based activist, “It is in Obiano’s interest that INEC ordered supplementary election in areas where the election was cancelled. Whoever aspires to rule Anambra should do so using only clean votes. Besides, there is no need declaring Obiano winner only for the courts to annul it due to failure to follow due process. I, therefore, advise Obiano’s camp to concentrate on preparing on the supplementary election.”