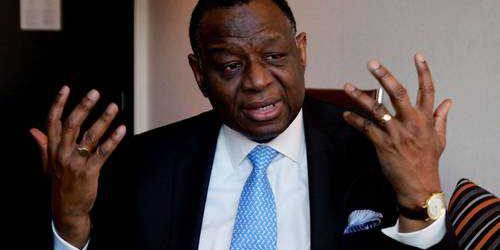 The executive director of the United Nations Population Fund (UNFPA), Prof. Babatunde Osotimehin called on the US-led coalition of nations fighting ISIS in Syria and Iraq to extend their force of arm to Boko Haram fighters in Northern Nigeria. He made the call at the Christian Association of Nigerian-Americans (CANAN)’s annual dinner held yesterday at Hilton Hotel in New York City.

Professor Osotimehin’s UNFPA is one of the vast group of organizations that have come together to form a global platform aimed at focusing the world’s attention to the plights of terror victims in Nigeria.
The former minister of health in Nigeria chronicled the transformation of Boko Haram from a local sect to a group allied to ISIS and other leading terrorist groups in the world. He called the Boko Haram group an occupying force that we must fight and vanquish.

“We need to be careful as Nigerians because Boko Haram fighters are trying to take roots and do things we are not used to,” he warned.

In his contribution to the discussion, the former Under-Secretary-General of the United Nations, Prof. Ibrahim Gambari, urged the participants to see that fight as a Nigerian fight not one that should concern only the North.

“I’m happy that the Nigerian government have decided to fight fire for fire,” he said. The former Nigerian Minister of External Affairs however added that the government has to do more. “It’s the government that we have to hold accountable. The president has woken up. The military has done better.”

In his reaction, Nigerian ambassador to the United States, Prof. Ade Adefuye, defended the government’s reaction to the insurgency. The government of Nigeria he said moved fast when the Chibok schoolgirls were kidnapped. He also said that the government was doing everything humanly possible to rescue the girls.

“There is no reasonable government in the world that won’t do anything to stop this scourge,” he said. “To accuse the government of indifference is not only inhuman, it is sinful.”

As part of the dinner, CANAN launched a $1 million dollar fund to assist the victims of Boko Haram violence in Nigeria. Making the announcement, the president of CANAN, Dr. James Fadele urged the members of the group to put themselves in the place of the victim and help alleviate their suffering. Echoing the same sentiment, the executive director of CANAN, Pastor Laolu Akande, described the Global Platform for Terror Victims as a forum for all people of goodwill, irrespective of whether they are Christians or Muslims, to gather and help alleviate the suffering of victims.

Hosting the fundraising, Pastor Mike Adebiyi of the Jubilee Christian Church in Atlanta told the audience that Boko Haram insurgence required more than prayers. He said that the church was good at praying but not quick at taking action.

Speaking on behalf of his director, Ozonnia Ojielo, the coordinator for Conflict Prevention and Recovery Team at the United Nations Development Program (UNDP) told the gathering to get the message out that the fight is not against religion. He charged that security centered approach to terrorism is not the only solution and could only go so far. He called for an integrated and compassionate approach.