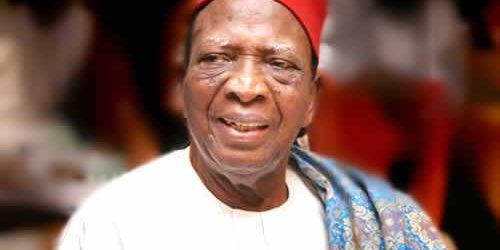 LEGAL luminary and Chairman of The Patriots, Professor Ben Nwabueze (SAN), has thrown his weight behind President Gooduck Jonathan’s proposed national conference, saying that it could not be like the National Political Reforms Conference, NPRC, organised by former President Olusegun Obasanjo in 2005.

The elder statesman, who enumerated measures that can make the proposed conference yield desired results, picked holes in calls for a Sovereign National Conference, which he described as a contradiction as a sovereign government is sitting.

In a 10-page article titled: Nature and Character of the Proposed National Conference: Its Primal Purpose and Modus Operandi, Nwabueze said that Jonathan’s proposed conference was different from Obasanjo’s abortive NPRC.

Disclosing that his committee of 15 lawyers and political scientists that is preparing a draft constitution will begin sitting next Tuesday in Lagos, he said: “In February 2005, President Obasanjo suddenly convened what he called the National Political Reform Conference comprising a motley of persons handpicked by

himself and the state governors as well as some members of certain ethnic groups and other associations —a completely undemocratic body with no mandate from the people or from the ethnic nationalities and civil society organisations.

There was no enabling law establishing it and backing up its work. Its role, as announced by the then Attorney-General of the Federation, Chief Akinlolu Olujinmi (SAN), was only to make recommendations which the National Assembly and the Presidency would look into and see how to integrate these views into our Constitution.

In other words, the conference was simply part of a process of consultations to aid the Presidency and the National Assembly in the discharge of their functions with respect to the amendment of the Constitution. The NPRC thus differed totally in nature and character from the proposed National Conference. The NPRC was dogged by crisis and, after some months of deliberations, ended abruptly in confusion. Its failure is, to some extent, a product of defects in its character and structure as noted above.

“Being thus a palpable fraud, a farce, and programmed to come to nothing, the 2005 NPRC cannot in any way be equated with the proposed national conference, or be used as a basis for saying that the latter will also come to nothing. As conceived, the proposed National Conference has a specific purpose, namely, to discuss and agree on the terms and conditions to be embodied in a new Constitution as the basis on which the diverse nationalities and peoples comprised in Nigeria can live together in peace, security, progress and unity as one country under a common central government.”