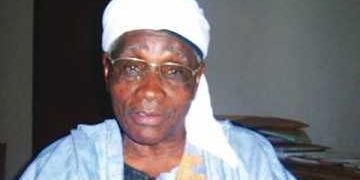 The North said on Tuesday that the role being played by wife of President Goodluck Jonathan, Patience, and the abuse of the rule of law in Rivers State showed that the country was sliding into anarchy and lawlessness.

Spokesman for the NEF, Prof. Ango Abdullahi, who spoke on behalf of the coalition at a joint press conference , insisted that the hands of the Presidency were clearly visible in the Rivers State saga that “appears to draw inspiration from the ambition of President Goodluck Jonathan to stay in power in 2015.”

He said the developments in Rivers State represented new low in the shameful conduct of political officeholders at the highest level, which must be condemned by all Nigerians.

Stressing that those fanning the ember of violence in Rivers State had abandoned their responsibilities in pursuance of “imaginary enemies”, the professor of agriculture warned that the development could endanger the nation’s democracy and national security.

He said, “The crisis in Rivers State is a sad reminder of our experience in the Western Nigeria crisis of 1963. It is symptomatic of the politics of intolerance, which has remained the hallmmark of political experience since 1999.

“From former Governor Dariye of Plateau State, former Vice President Atiku Abubakar, Chief Audu Ogbe, Chief Vincent Ogbulafor, Dr. Ekwesilieze Nwodo, and most recently, Chief Timeripe Sylva – all perceived enemies at one time or the other since 1999, had been subjected to venomous, vengeful and unforgiving treatment all in he name of politics and struggle for power.”

He said in the view of the groups the President should order an immediate cessation of hostilities in Rivers State and stop using the Nigerian Police Force to settle his political disputes.

Abdullahi added, “The Nigerian Police is not a political party and certainly not an arm of the Peoples Democratic Party. It must not be dragged into the internal crisis of the President’s party. The governor and indeed the people of Rivers State, as indeed all citizens of Nigeria, deserve full potection of the law and other rights to live in peace under state-guaranteed security. No one should be persecuted.

“The alarming desperation of the politicians to manourver themselves into vantage positions for electoral contests of 2015 is the major threat to the elections themselves and ultimately, the democratic process. The clumsy and embarrassing conduct and fallout of the election of the Nigeria Governors’ Forum, the engineered crisis in the ruling party, the role of the spouse of the President in the affairs of Rivers State, are signs that Nigeria is descending into anachy and lawlessness rarely seen in our history.

“The hands of the Presidency are clearly visible in all these events that appear to draw the inspiration from the ambition of President Goodluck Jonathan to stay in power in 2015.”

In a related development, the region also alerted that the New Census Board was out to instigate unwanted crisis in the country.

“There are ominous signs that the new leadership of the NPC is out to create sensation and plunge Nigeria into avoidable crisis. Instead of settling down to understand the complex demographic dynamics of the country, the new leadership has so far only engaged in spurious allegatioins,” Abdullahi said.

Meanwhile, one of the five Rivers State lawmakers opposed to Governor Rotimi Amaechi, Mr. Evans Bipi, on Monday made a surprise appearance at the Presidential Villa, Abuja.

Bipi’s purported election as the new Speaker by the anti-Amaechi lawmakers fuelled the mayhem that broke out in the House of Assembly last Tuesday.

The lawmaker attended a state banquet, which President Goodluck Jonathan hosted in honour of participants of the just-concluded African Union Special Summit on HIV/AIDS, Tuberculosis and Malaria, tagged Abuja +12.

In a short interview with State House correspondents after the event, Bipi claimed that over 23 of his colleagues elected him to replace Mr. Oelemabama Amachree, contrary to the claims that only the five anti-Amaechi lawmakers met.

He attributed his emergence to God, who he said made it possible for him to serve his people again.